On the Town is a musical and film featuring music by Leonard Bernstein (West Side Story, Wonderful Town) and book and lyrics by Betty Comden and Adolph Green. The musical was based on an idea by Jerome Robbins and puts many of his famous dances to music. Songs from the show have since become standards such as “New York, New York”, ” Lonely Town” and “I Can Cook Too”. The show follows a group of sailors who are on 24 hour leave and aim to find themselves an amazing woman. The show was moderately popular, but it was the film version, starring Gene Kelly and Frank Sinatra that is most remembered by audiences. The score is often remembered over the book or dances, and is often performed by opera companies such as the English National Opera. 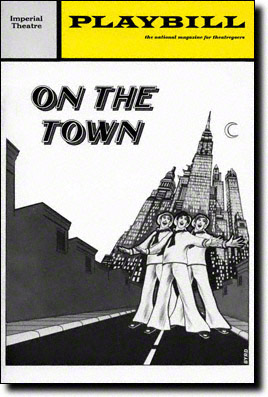 In the Brooklyn navy yard, three soldiers stumble off a ship at dawn ready to take on “New York, New York.” Ozzie is out to get as many girls as possible, while Gabey wants a real romance, and Chip is more interested in seeing tourist attractions. On their way into Manhattan, they see a poster of Miss Turnstiles who has been chosen to appear in subway stations for the month. Her real name is Ivy Smith, and she studies ballet at Carnegie Hall, painting at the Museum of Modern Art, while also loving the city’s vibrant club scene. They agree they’ll try to track her down over the course of the day and split up to look for her based on the information they find on the poster, which they’ve torn down for reference. An old lady spots them vandalising the station and reports the to a police officer, who begins to pursue them.

A female cab driver named Hildy takes a shining to Chip, who remains naïve of her intentions (“Come Up to My Place”). Ozzie arrives at the Museum of Natural History, even though he should be looking for Ivy at the Museum of Modern Art. A young anthropologist, Claire finds him attractive, particularly given his resemblance to an ancient ancestor of man she is studying. When they accidentally destroy a dinosaur skeleton, they are forced to flee the museum with the police in hot pursuit.

Gabey heads to Carnegie Hall, but on his own he begins to find that New York is a “Lonely Town.” Ivy is mid-lesson with Madam Dilly, but Gabey manages to sneak in and arrange a date with her later on in Times Square. Gabey is thrilled that he managed to snag a date with Ivy first (“Lucky to Be Happy”).

Claire and Ozzie get “Carried Away” in her uptown apartment, while Hildy is still trying to seduce Chip. Gabey is in Times Square waiting for Ivy when the other boys arrive with their respective dates. Unfortunately Madam Dilly has convinced Ivy she should work instead of fraternising with a sailor, so she does not arrive to meet Gabey. Instead she heads to work on Coney Island.

The group heads to a number of clubs in an attempt to cheer up Gabey, but they are unsuccessful. The sailors are sad that their 24 hour leave is drawing to a close, but they decide to visit Coney Island before they leave. Gabey finds Ivy dancing in a club, and is pleased to be reunited with her. The police arrive to arrest them for their various misdeeds, but the whole misunderstanding is explained and the boys are set free. They say goodbye to their girls and head back to their ship, where a new group of sailors get off for their own 24 hour adventure.