Candide is billed as an opera/operetta and has been revised in a wide variety of forms over the past fifty years. Although it began life as a play with music, it quickly became a favourite project of composer Leonard Bernstein who wrote the entire score. The Overture has become widely recognised as one of the most famous from its genre and is regularly performed by orchestras all over the world. The book has been adapted on various occassions for different forms of performance, and is now regularly performed in a concert format, complete with narration to make it as clear as possible. The most successful stage production was the Royal National Theatre production that involved director John Caird. Songs such as ‘Glitter and Be Gay’ and ‘Make Your Garden Grow’ have become standards and are performed regularly. 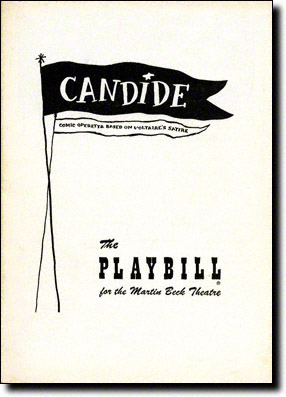 the novella by Voltaire

In Westphalia, Voltaire begins to tell the story of Candide (“Westphalia Chorale”). Candide is the illegitimate nephew of Baron Thunder-ten-Tronk and lives in the castle, where he is disliked by the Baroness and her son Maximilian. He loves her beautiful daughter Cunegonde. Maximilian meanwhile is involved with the local prostitute, Paquette, and all four feel that “Life is Happiness Indeed.” Their teacher Dr. Pangloss instructs them on philosophy and assures them they have “The Best of All Possible Worlds.” Candide and Cunegonde are deeply in love and imagine what life would be like if they got marred (“Oh, Happy We”).

The Baron is furious at the budding romance between Candide and Cunegonde, because Candide is of a lower class, so the Baron banishes him to exile. Candide takes his fate well and believes he will find his love again (“It Must Be So”). He joins the Bulgar Army, but upon learning they plan to attach Westphalia, he unsuccessfully tries to escape. The Baron and his family await the impending attack on “Westphalia,” during which the Baroness and Cunegonde killed. Candide arrives and tries to find his beloved (“Candide’s Lament”).

Now penniless, Candide runs into Dr. Pangloss, who retains his trademark optimism. They are hired on a merchant ship which sets sail for Lisbon. Upon arrival, a volcano erupts, killing thousands. Candide and Pangloss are blamed for the eruption, and accused of heresy by the Grand Inquisitor. Pangloss is hanged while Candide is tortured, but he manages to escape and flees to Paris.

In Paris, a beautiful woman has attracted the attention of the city, and she is revealed to be Cunegonde, who managed to escape the attack on Westphalia. While in France, she has enjoyed learning to “Glitter and Be Gay.” Candide manages to find her and is elated (“You Were Dead, You Know”). The happy reunion does not last, however, as Candide accidentally kills the Archbishop and the wealthy Don Issachar, who have both been courting Cunegonde. With Cunegonde’s friend, the Old Lady, in tow, they flee to Spain.

Cunegonde’s many jewels are stolen in Spain, and the Old Lady sings for their supper (“I Am Easily Assimilated”). The French police have followed them to Spain, hoping to arrest Candide for murder. After hiring a valet named Cacambo, Candide decides to fight for the Jesuits in Latin America, and the three set sail for the New World (“Quartet Finale”).

In Uruguay, they are reunited with Maximillian and Paquette, who have also risen from the dead and disguised themselves as slave girls. The governor of the city falls in love with Maximilian, believing he is a woman (“My Love”), but when he realises he is a man, he falls in love with his sister Cunegonde. The Old Lady encourages Cunegonde to marry the governor as they will be better off (“We Are Women”). Candide reveals his intention to marry Cunegonde to Maximilian, who challenges him to a duel, and Candide flees after stabbing Maximilian to death.

Cunegonde has a comfortable life after marrying the governor, but finds life too “Quiet.” Candide and Cacambo make their way through the jungle when the discover the legendary city of Eldorado, where they collect a fortune. Candide sends it to the governor to buy Cunegonde’s freedom, along with a message for her to meet him in Italy.

Candide buys a ship to sail to Italy, but when it sinks he is rescued by Pangloss, who has also come back to life and is sailing by on a raft. They arrive in Venice to find that Maximilian too has returned from the dead and is the Police Chief, working in cahoots with a band of criminals. Cunegonde and the Old Lady are forced to work in the local casino (“What’s the Use?”).

They all attempt a new start when Candide leads them all to move to a farm in Westphalia, worrying that his life will amount to “Nothing More Than This.” After spending several days contemplating in silence, he decides to marry Cunegonde (“Make Our Garden Grow”).