My Fair Lady features music by Frederick Loewe along with book and lyrics by Alan Jay Lerner and is based on the play ‘Pygmalion’ by George Bernard Shaw. The show follows cockney flower girl Eliza Doolitte who takes speech lessons from Professor Henry Higgins, who boasts that he can pass her off ‘as a Duchess’. The show was extremely popular on both Broadway and in London and has played many successful runs around the world. The original cast included Julie Andrews and Rex Harrison, and the impressive film starred Audrey Hepburn. 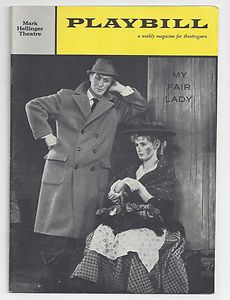 In Edwardian London, members of the upper class are exiting the Royal Opera House in Covent Garden. Cockney flower girl Eliza Doolittle tries to sell some of her flowers, but causes a raucous when she notices a man writing down everything she is saying. An older gentleman, Colonel Pickering, buys a flower and then confronts the man, who reveals himself to be Professor Henry Higgins who is an expert in phonetics. He explains that he studies a variety of accents and wonders “Why Can’t the English” learn to speak properly. He bets that he could change Eliza into a high society lady in six months just by correcting her way of speaking. Pickering turns out to be a linguist as well and has just returned from studying Indian dialects. Higgins invites Pickering to stay at his house, and the two head off, ignoring Eliza.

Eliza imagines how her life would be different if she had a better fortune (“Wouldn’t It Be Loverly?”). Eliza’s father Alfred Doolittle arrives the next morning to ask her for money so he can go drinking with his friends. She reluctantly gives some to him, and he explains he doesn’t worry about his state of poverty as he has always gotten by “With a Little Bit of Luck.”

Higgins and Pickering are discussing linguistic theories when Eliza turns up unexpectedly, declaring that she has come for speech lessons so she can get a position in a flower shop. Higgins is at first revolted, but Pickering bets that he cannot change her accent in just six months. Amused, Higgins takes the bet and has Eliza move into his house so they can work on her accent constantly.

Doolittle hears that Eliza has moved in with a rich professor and sees an opportunity to make a bit of cash. He arrives at the Higgins residence and is under the impression that the Professor has had her move in for lecherous purposes, but makes it clear he’ll look the other way provided he is paid for her. Higgins finds Doolittle’s speech patterns and views on morality fascinating, and on a whim decides to recommend him to an American who has just written asking for a lecturer on English moral values.
Eliza has a torturous time trying to improve her English, and Higgins is relentless. She grows to despise him for keeping her awake at all hours repeating vowels over and over again (“Just You Wait”). Late one night, she finally nails an upper-class accent (“The Rain in Spain”) and celebrates with Higgins and Pickering. Eliza is so excited by her success she is unable to sleep (“I Could Have Danced All Night”).

Higgins decides to try Eliza out with her new accent and brings her to the Ascot Race, where he springs her upon his mother at the last minute. Though her pronunciation is correct, Eliza retains the slang and inappropriate mannerisms of her former dialect, to the shock of Mrs. Higgins guests. She does manage to attract the attention of Freddy Eynsford-Hill, who becomes infatuated with her and begins calling on her every day. She refuses to see him, but he still spends his days on her street (“On the Street Where You live”).

Finally the ball arrives, and Eliza has transformed into an elegant woman. She passes the test with flying colours, and one of Higgins’ former phonetician Zoltan Karpathy is so fooled by her disguise that he declares she must be Hungarian royalty. Higgins and Pickering declare the event a tremendous success, but do not even think to give Eliza any credit whatsoever (“You Did It”). Eliza feels that she was used and confronts Higgins, who does not understand why she is upset. Furious, Eliza flees the house and runs into Freddy, who declares his love for her. She has had enough of words and demands actions instead (“Show Me”). They head to Covent Garden, where Eliza’s old friends do not even recognise her. She runs into her father, who reveals he has received a fortune from the American millionaire looking for lecturers on morality, and now that he is rich, his girlfriend is forcing him to make an honest woman out of her by getting married (“Get Me to the Church on Time”).

The next morning, Higgins is surprised at Eliza’s behaviour and wishes that women could be more like men (“A Hymn to Him”). He heads to his mother’s house to ask her advice, only to find Eliza there having tea with Mrs. Higgins. Eliza reiterates to Higgins that she was being treated like a servant and declares she will marry Freddy. She defiantly insist she will have no problems carrying on without Higgins (“Without You”). Higgins is delighted by the passion Eliza has displayed and requests that she stay with him, but she refuses.

On the walk home, Higgins realises how much he depends on Eliza (“I’ve Grown Accustomed to Her Face”). By the time he reaches home, he is devastated to lose her. He turns on recordings he made of her very first visit. Eliza quietly enters the room and turns off the phonograph, finishing the sentence her former self began. Higgins smirks when he realises she has returned, and cheekily asks her to find his slippers.