From the writers of Les Miserables came one of the most successful musicals of the 1990s – Miss Saigon. Originally opening in London, the show was a huge success running for over 10 years at the Theatre Royal Drury Lane. The Broadway production had the largest advance in history, and was almost called off after controversy with Actors Equity and the casting on non-asian actors in Asian roles. The show is a modern retelling of ‘Madame Butterfly’, relocated to the Vietnam War. 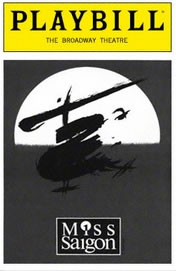 American GI falls in love with Vietnamese bar girl, leaving her with a child after helicopter rescue. Attempts to reunite end in death.

In Vietnam during the outbreak of war with America, we are welcomed into a seedy nightclub called ‘Dreamland’ by an Engineer. As the bar girls prepare themselves for a night of making money, the curtain rises on a group of American GI’s hoping for one last good time before leaving for America. Chris has been dragged along by his friend John who wants to buy him a girl, and Chris meets Kim, a new 17 year old girl who has arrived from the country to work at the bar. As Gigi wins the title of ‘Miss Saigon’, the girls all wish for their GI partners to take them to a better life in America. The Engineer sells Kim to Chris for a night of passion as the two dance. Chris can’t believe he has found Kim so close to him leaving Vietnam for the USA. As Kim and Chris begin to fall in love, they enter into a cultural wedding ceremony and Kim is given the title of ‘Miss Saigon’ by her peers. Thuy, Kim’s cousin arrives to take her home and is disgusted to find her with Chris, saying he is betrothed to her. As their parents are both dead Kim tells him this is not true, and Chris and Thuy fight, before he leaves them to join the North Vietnamese Army. Chris promises to come back to Vietnam to find Kim after the war is over.

Three years later Vietnam is celebrating the fall of Saigon and the new Ho Chi Minh City. Thuy demands that the army find the Engineer, and that he brings Kim to him. He finds her living in poverty with her child, Tam. Back in America Chris is sleeping with his new wife Ellen, and she has a nightmare as the two girls sing together. Thuy attempts to kill Tam, but Kim fights back, running away from the city. The Engineer decides to help her once he finds out Tam is Chris’ child and could be his passport to the USA. They set off for Bangkok amongst other refugees, with the Engineer posing as Tam’s uncle.

Over in Atlanta, Georgia, John now works for an aid organisation that attempts to connect children conceived during the war (Bui-Doi) with their American fathers. He finds out that Kim is still alive and tells Chris, who is forced to reveal to Ellen about Kim and his child. They travel to Bangkok to try and find them. The Engineer is working for seedy nightclubs once again and Kim works as a dancer. As John finds the pair, Kim is overjoyed to hear the news about Chris, and John can’t bear to tell her that he is now married with a wife. She is convinced he has come to take them both to America. Kim is haunted by a nightmare of the night that Saigon fell. She dreams about the confusion of that evening, where Chris attempted to find her amongst the crowds, but was put in the last helicopter out of Saigon. The ghost of Thuy taunts her that Chris never loved her.

Kim tries to find Chris but instead comes across Ellen first. Kim finds out that he has married and runs away, hurt. She tries to give away her son to Ellen and Chris to give him a better life. Ellen tell Chris that he has to make up his mind, and they reaffirm their love, saying they will send money to Bangkok to support both Kim and Tam. Kim lies to the Engineer about the situation and he is overjoyed at the prospect of going to the USA. As John, Chris and Ellen are led to Kim, the Engineer shows Chris his child. Kim goes behind a curtain and shoots herself, sacrificing herself so Tam can become an American. Chris holds Kim in his arms before she dies and they share a final kiss as the curtain falls.