Next to Normal features music by Tom Kitt and Book and Lyrics by Brian Yorkey. The tight suburban drama focuses on a family who struggle to come to terms with the mother’s worsening bi-polar disoder. The show was developed off-Broadway and picked up a lot of positive press before opening on Broadway in 2009. The show was a critical hit and went on to win the Pulitzer Prize for Drama. Alice Ripley starred as Diana the mother and won the Tony Award for her magnificent portrayal. 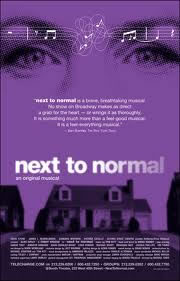 A suburban family try to go about their normal lives whilst teetering on the edge of disaster. Diana sits up waiting for her son to return after his curfew whilst comforting her nervous daughter Natalie who suffers from overachieving. The next morning Diana’s husband Dan helps her prepare everyone for the day ahead, but an incident making sandwiches makes him think that something isn’t quite right. Natalie rehearses piano in a school practice room, and is interrupted by Henry who likes her music and has feelings for her.

Dan encourages Diana to visit the Doctor and over the course of a few weeks she is diagnosed with bipolar disorder which have been giving her hallucinations. She is put on medication to stabilise her feelings. Henry continues to pursue Natalie and she gives in to his advances, finally kissing him. Diana feels happy for her daughter, and her son encourages her to flush away her medications. Later, at a family Dinner Dan is feeling positive about Diana’s condition, until she enters with a birthday cake for her son. Dan explains to her that their son died 16 years ago and tries to comfort her, but her son tries to convince her to listen to him and ignore her living family. Natalie rushes off to vent to Henry and is confused at her mother’s feelings.

Dan takes Diana to the Doctor again, and despite her son’s continued efforts to assert himself, she finally convinces herself to let him go. She tries hypnotherapy which seems to help, although as she begins to clean out his room her son invites her to dance with him, and she does. Diana is then admitted to hospital and restrained and it is clear that she has been self harming. The Doctor explains that ECT will be used, but Diana lashes out and refuses the treatment. Dan tries his hardest to convince her that ECT is their last hope.

Whilst Diana undergoes a series of treatments Natalie begins to go off the rails with alcohol and drugs, and Henry is worried about her, inviting her to the school dance with him. Diana returns home and has lost 19 years worth of memory. The Doctor tells the family to help jog her memory with photos and stories which they do, but Diana knows there is something she wants to remember but can’t. As Henry arrives to see Natalie Diana studies his face convinced she knows him. She finds a music box that Natalie hid from her, and the memories of her son come flooding back to her. She argues with Dan who refuses to help her control the memory, and he smashes the music box, just as Henry arrives to take Natalie to the dance.

Her son reappears and she is rushed to the doctor again, but Diana refuses to take therapy. In an intimate moment, she explains her feelings to Natalie for the first time and urges her to go and meet Henry at the school dance. Diana decides to leave Dan as not to be a weight around his neck. Their son appears to taunt Dan and he faces the boy, revealing his name to be Gabriel.

Natalie comes home to see her father distressed and they both comfort each other saying things will somehow be alright. Diana goes to stay with her parents, and although she is still ill she is more hopeful. Their lives continue and Gabe continues to watch over them all.