Merrily We Roll Along is one of Sondheim’s most undervalued work, with an infamous original production of only 16 performances. Featuring a book by George Furth, the show is based on a 1934 play by George S Kaufman and Moss Hart. The narrative runs backwards, and further revisions have attempted to make the structure fully cyclical. Although the score features some of Sondheim’s most popular work, audiences have often struggled with the over ally concept and book and the show has never been a commercial success. 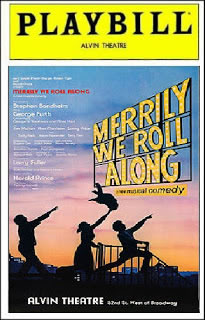 A Play by George S. Kaufman and Moss Hart

The price of Hollywood fame is spelled out backwards through a group of high school friends who each struggle as artists and to find love.

The show begins in 1980 and journeys back in time rather than forward. The show opens with Franklin Shepard who has become a successful film producer and songwriter, earning lots of money and living the Hollywood lifestyle. We travel back to 1976 to LA as Frank celebrates after the premiere of his latest blockbuster. His fair weather friends are there to celebrate with him, but his long term friend Mary Flynn is disgusted at Frank’s new lifestyle and what he has allowed himself to fall into. She attacks Frank for giving up on writing ‘real’ music, instead selling out for commercial gain. Frank admits he knows what he has done but wants to get better and better. Mary’s words begin to affect him and he realises that he has focused his life on being a success, and everything he once loved has now gone. He decides to leave his wife Gussie, who later attacks Meg who Frank has been having an affair with. Gussie was a performer in one of Frank’s earlier shows and she is disgusted with his behaviour.

The years roll back to 1973 where Frank and his best friend Charley are being interviewed for TV regarding their new work. Mary comes along to support her friends, although Charley admits to her that Frank has very little time for him any more and the two reminisce about what their college friendship was like. As the TV interview begins, Charley launches into an attack on Frank, saying he has transformed himself into ‘Franklin Shepherd Inc.’ Frank storms out saying their friendship is over.

Back to Frank’s apartment in 1968 and the gang are arguing over Frank’s decision to do a film version of one of their musicals. Charley is against the project artistically, but Frank is attracted by the fame and money. Mary tries to keep the peace before Joe and Gussie arrive, with whom Frank has been having an affair.

In 1966 Beth is divorcing Frank and they argue about custardy of their son. Beth tells him she knows about him cheating on her with Gussie and says she has to leave him. Mary and Charley convince him that he will be okay and can start afresh.

It is the opening night of one of Frank and Charley’s shows and Gussie has realised that Frank likes her. She is the star of the musical, and Joe, Mary and Beth are excited that the show has been such a hit. We go backwards the 1962 to see how the idea for the show came about, as Gussie throws a party in her husband Joe’s apartment to persuade him to producer Frank’s show. The trio perform one of the song’s to the crowd, and tensions between Charlie and Frank begin to bubble.

In 1960 we see Charley, Frank and Beth beginning their lives post-college in a small nightclub, trying to make a name for themselves. As they perfom, they are noticed by producer Joe and his wife Gussie who takes an instant liking to Frank. We see the group a year before in 1959 trying to write songs and make it big. They are told to write more memorable songs so they decide to create a cabaret, and meet Beth.

The show ends in 1957 with Charley, Frank and Mary on the roof of an apartment building watching the satellite Sputnik as it passes the city. They see it as a symbol that anything is possible.