Memphis is a Tony Award winning musical featuring music and lyrics by David Bryan and Joe DiPietro. What happens when a 1950′s Memphis DJ with white listeners decides to play African-American music? Is Memphis ready for it? Is America? The story was inspired by the legendary DJ Dewey Phillips and the music that became known as “rock ’n’ roll.” The show was a hit in New York in 2009 and clocked up an impressive number of performances, finally recouping all its original investments. The show has been videoed and released commercially, and is rumoured to be travelling to the West End in 2013. 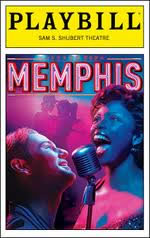 A 1950s DJ is the first to play African-American music to white listeners and soon falls in love with a talented black singer.

The place is 1950s Memphis. The show opens with a party at Delray’s, an underground African-American Rock and Roll bar. A white gentleman Huey arrives and as the regulars begin to leave he begs them to stay, saying he is there to hear the music. He is on the verge of being fired from work at a local department store, but makes a bargain with his boss saying that if he can sell 5 records by playing them over the loudspeaker he can work for the sales department. He plays a Rock and Roll record, but despite selling 29 of them in minutes, he is fired for playing ‘obscene’ music. He then returns to the club and flirts with Felicia, promising her he can get her on the radio. He applies for jobs at local white radio stations. He is invited into one run by Mr Simmons, and he hijacks the airwaves playing another rock’n’roll African-American song. He is about to be fired when dozens of people call the station to demand more music from Huey. He is then taken on for a 2 week trial. He is later asked to advertise Beer on the air, but as he can’t read he can’t follow the script and ends up improvising using the word ‘Hockadoo!” Again he is almost fired, but the Beer company call saying that sales increased and employ him to do all of their future adverts. The station begins to gain popularity thanks to Huey and his new catchphrase. He begins to invite white people to visit black churches and they begin to.

Delray has saved enough money to get Felicia’s voice on the radio and travel to Huey’s house to make the record, where he promises to play it the next day. His mother is prejudice and breaks the record, upsetting Felicia. Huey gets her to sing live on air instead and is an instant sensation. The two become closer and closer although Delray threatens Huey and wants to make sure nothing happens to his sister. Their music continues to bring people together and two years later Huey proposes to her. She turns him down as she is worried what people might say. As they kiss, a white gang see them and beat Felicia with a bat. Delray is furious with Huey and as they push her into an ambulance the community sings a prayer for change.

Some time passes and Huey is getting ready to open up a new TV show which features African-American dancers. Felicia is set to be the first guest but she backs out and Bobby fills in bringing down the house. Felicia’s popularity begins to grow around Memphis and people start accepting her relationship with Huey. They are both spotted by a New York agency who invites them to come and compete for a national TV show. Huey is offered the job providing he doesn’t use African-American dancers. He is furious and kisses Felicia live on air and she tells him she loves him. Huey is fired.

Delray takes Felicia away to try and save her career whilst Huey contemplates leaving Memphis all together. Four years pass and Felicia is a big star and Huey is presenting a small radio show. Felicia tells him she is engaged to marry a man named Bill and invites him to perform with her one final time. Huey is worried no one will remember him, but as he gets onstage he is met with rapturous applause.