Dames at Sea features book and lyrics by George Haimsohn and Robin Miller with music by Jim Wise. The show is a parody of a flashy 1930s musical and follows an understudy who steps into a leading role on Broadway, ultimately becoming a star. It originated as a small sketch based on the Gold Diggers, and was expanded to become a full length book musical. The show had humble beginnings off-off-Broadway, and went on to upgrading to a Broadway and London run. The show marked Bernadette Peters’ Broadway début and she won a Drama Desk award for her performance. 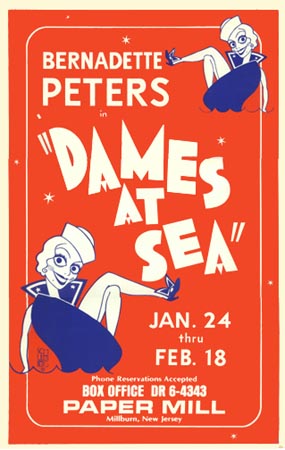 At the dress rehearsal of a new Broadway musical, “Dames at Sea,” veteran diva Mona Kent is practicing her opening number when wide-eyed newcomer Ruby arrives at the theatre looking for a job. She has just got off a bus from her hometown in Utah and hasn’t eaten in three days. The manager, Hennessey dismisses her immediately, but one of the showgirls, Joan tells him that a girl in the chorus has just eloped with a millionaire so there is a vacancy. To save time, Hennessey gives the job to Ruby.

Excited and famished, Ruby faints and is caught by Dick, a songwriting sailor who found her suitcase and followed her to the theatre. They fall in love at first sight. When Joan takes Ruby to eat something, Mona sets her sights on Dick and he agrees to give her one of his songs to sing. One of Dick’s fellow sailors, Lucky, arrives and turns out to be the ex-boyfriend of Joan. They find their love starting to be rekindled while Ruby is falling even more in love with Dick.

Hennessey reveals disastrous news: just before opening night, the theatre has been sold is scheduled to be demolished immediately. The cast and crew pack up the set and search for a new home. Dick and Lucky have the brilliant idea to try to convince their Captain to allow the show to be performed on the deck of their ship. He is at first resistant, but becomes convinced by Mona’s sultry dancing.

On board the ship, Mona realizes the Captain is none other than her long lost love “Kewpie Doll.” They reminisce about the evening she served him chili con carne as a small-town waitress in Pensacola. Dick arrives as the Captain leaves, and Mona, desperate for another great song, convinces him to kiss her. Ruby walks in on them and is devastated.

As rehearsals on the ship are finishing, Mona becomes violently seasick and unable to perform. The entire cast is in a panic trying to figure out who can replace her, when all eyes turn to Ruby. She manages to go on and steal the show. Afterwards, Dick explains the misunderstanding and that he loves her. They decide to get married, as do Lucky and Joan and the Captain and Mona. All three get married on the ship to a 21-gun salute.

1 thought on “Dames at Sea”