Les Misérables is a sung-through musical by Boubil and Schonberg based on the epic Victor Hugo novel of the same name. After receiving notoriously poor reviews from the critics when it premiered at the Barbican in 1985 Les Miserables went on to become the most successful musical the world has ever seen. The RSC’s production directed by Trevor Nunn and John Caird is the longest running musical in the world, although it has moved locations twice first to the Palace Theatre and then to the Queens theatre where it continues to play to this day.

Set in early 19th century France the musical tells the story of John Valjean a peasant sentenced to 19 years enslavement for stealing a loaf of bread to feed his sisters starving child. After breaking his parole and trying to turn his life around he is relentlessly pursued by policeman Javert. Along the way he meets various characters, adopts a daughter ‘Cosette’ and becomes caught up in the students revolution. 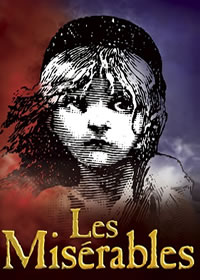 An ex-convict is pursued relentlessly by a policeman. They and other characters become caught up in the Paris student revolts of 1832.

In France 1815 prisoners are forced to work in a chain gang “Work Song”. After 19 years enslavement for stealing a loaf of bread to feed his sisters starving child Jean Valjean aka prisoner 24601 is released on parole by policeman Javert. Valjean must display a yellow ticket-of leave which identifies him as an ex-convict and condemns him to be shunned by society “On Parole”. The only person to treat him kindly is the Bishop of Digne and Valjean embittered by his years of misery repays him by stealing the silver. Valjean who is subsequently caught by the police and brought back to the Bishop is astonished when the Bishop covers for him and gifts him the rest of the silver. “Valjean Arrested, Valjean Forgiven” Inspired by this act of kindness Valjean decides to turn his life around “Valjean’s Soliloquy”/”What Have I Done?” Hoping to free himself from his criminal past he tears up his yellow ticket therefore breaking his parole.

The musical then jumps forward eight years to 1823 Valjean has adopted a new name Monsieur Madeleine and has become the proprietor of a factory and mayor of Montreuil-Sur-Mer. Fantine a single mother working in Valjean’s factory is discovered to have an illegitimate child Cosette, who lives with an innkeeper and unknown to Valjean the other factory workers call for her dismissal “At the End of the Day”. Fantine reflects on her broken dreams “I Dreamed a Dream”.

Desperate for money to support her daughter Fantine sells her locket and her hair before being forced into prostitution “Lovely Ladies”. She gets into a fight with a customer and is to be arrested by Javert who is now an inspector in the area when Val Jean wracked with gulit for his involvement in her plight rescues her and takes her to a hospital. “Fantine’s Arrest”

Shortly after Valjean rescues a man pinned by a runaway cart “The Runaway Cart”. Javert who has not recognised him up until this point is reminded of the incredible strength of prisoner 24601 and becomes suspicious. However it turns out that another man has been arrested as Valjean. Unwilling to see an innocent man go to prison for him Valjean confesses his true identity to the court “Who Am I?—The Trial”.

Valjean promises Fantine on her death bed that he will look after her daughter Cosette “Come to Me”/”Fantine’s Death”. Javert arrives to arrest Valjean but he manages to escape “The Confrontation”.

In Montfermeil Cosette has been in the care of exploitative innkeepers the Thénardiers who treat her like a slave while indulging their own daughter Éponine. Cosette dreams of a better life “Castle on a Cloud”. The Thénardiers rip off their customers “Master of the House”. Valjean makes a deal with the Thénardiers and adopts Cosette “The Bargain” and they leave together for Paris “The Waltz of Treachery”.

The action then skips forward again nine years to 1832. Paris is in a state of unrest because of the impending death of the last man in Government who cares for the poor, General Lamarque. Among the crowds are student revolutionaries Marius Pontmercy and Enjolras, a street gang lead by Thenarider and his wife, their daughter Éponine who is all grown up and hopeessly in love with an oblivious Marius and streetwise young urchin Gavroche “Look Down”.

The Thénardiers gang attempt to rob Valjean and Cosette but are rescued by Javert who again fails to recognise Valjean even though he has pursued him all these years. Cosette bumps into Marius, and the pair fall in love at first sight “The Robbery”. Tipped off by Thénardier Javert realises too late who Valjean is and makes a vow to capture him “Stars”. Meanwhile, Marius persuades Éponine to help him find Cosette “Éponine’s Errand”.

At a café Enjolras rallies a group of idealistic students to prepare for revolution while a love sick Marius thinks about Cosette “The ABC Café—Red and Black”. When Gavroche brings the news of General Lamarque’s death the students see the opportunity to incite the people to revolt “Do You Hear the People Sing?”.

Cosette is overwhelmed with feelings for Marius and wishes to know why Valjean keeps secrets about both their pasts “Rue Plumet—In My Life”. A heartbroken Éponine leads Marius to where Cosette lives and they confess their love to each other while she watches on “A Heart Full of Love”. Éponine thwarts a plan by her father Thénardier and his gang to rob Valjean’s house by screaming a warning “The Attack on Rue Plumet”. Valjean believes the intruders to be sent by Javert and resolves to leave the country. On the eve of the 1832 Paris uprising the characters anticipate what the dawn will bring “One Day More”.
Act 2

The students build a barricade. Javert who has disguised himself as a rebel in an attempt to spy upon the rebels, volunteers to “spy” on the government troops. Marius discovers that Éponine has disguised herself as a boy in order to join the rebels and sends her away to deliver a letter to Cosette. “Building the Barricade—Upon These Stones”. Valjean intercepts the letter and learns about Marius and Cosette’s romance. Éponine walks the streets of Paris alone imagining that Marius is with her, she resolves that her love will never be reciprocated “On My Own”.

The French army demands the surrender of the students “At the Barricade—Upon These Stones”. Javert tells the students the government won’t attack that night “Javert’s Arrival” but is exposed as a spy by Gavroche “Little People”.

Éponine is shot by soldiers as she crosses the barricade trying to find Marius and dies in his arms “A Little Fall of Rain”.

Valjean arrives at the barricade in search of Marius “Night of Anguish”. The rebels initially suspicious of Valjean are won over by him when he saves Enjolras. In return he asks if he can be the one to execute Javert which they grant. When they are alone together Valjean frees Javert who swears he will never give up his pursuit of Valjean “The First Attack”.

The students settle in for the night and reminisce “Drink with Me”. After they’re asleep Valjean prays to God to protect Marius “Bring Him Home”.
As dawn approaches, Enjolras realises that the people of Paris have failed to join them in revolution and they are on their own but resolves to fight anyway “Dawn of Anguish”. Gavroche is killed “The Second Attack/Death of Gavroche”. The rebels refuse to surrender and are all killed apart from Valjean who escapes to the sewers carrying an unconscious Marius “The Final Battle”.

Valjean collapses from the exhaustion of carrying Marius and Thénardier who has been looting bodies “Dog Eats Dog” steals a ring from Marius before fleeing when Valjean regains consciousness. Valjean carries Marius out of the sewers to find Javert waiting for him. Valjean pleads with Javert to let him take the boy to a doctor and Javert reluctantly agrees. Valjeans act of mercy has shattered Javert’s view of the world and he commits suicide by throwing himself into the Seine “Soliloquy – Javert’s Suicide”.

In the aftermath of the failed revolution, women mourn the deaths of the students “Turning” and a wounded Marius despairs at the loss of his friends “Empty Chairs at Empty Tables”.

Unaware of who rescued him Marius recovers in Cosettes care. Valjean give the pair his blessing “Every Day” and confesses to Marius everything about his criminal past but makes him promise never to tell Cosette and insists on going away “Valjean’s Confession”. Later at Marius and Cosette’s wedding “Wedding Chorale” their reception is gate crashed by the Thénardiers who attempt to blackmail Marius informing him that Cosette’s father is a murderer and that Thénardier saw him carrying a corpse in the sewers after the barricades fell producing Marius’s own stolen ring as proof. Marius finally realises that it was Valjean who rescued him from the barricade. After punching Thénardier in the face he and Cosette go to find Valjean. The Thénardiers remain defiant “Beggars at the Feast”.

Marius and Cosette find Valjean dying in a convent Marius thanks him for saving his life and Cosette finally learns the truth about her past. “Epilogue – Valjean’s Death” The spirit of Fantine appears to him and tells him that he has been forgiven and she and Éponine guide him to heaven. They are joined by all those who perished at the barricade “Finale”.