Set in a largely Dominican-American neighbourhood of Washington Heights New York and taking place over the course of three days In the Heights gives an insight into a vibrant community and the lives of its inhabitants. The score is Latin Hip-Hop infused and the show’s themes are identity, community and family. The show was conceived by Lin-Manuel Miranda, who wrote the music and lyrics and also starred in the show. The show won four Tony Awards when it premiered on Broadway. The production was generally well received although the book by Quiara Alegria Hudes was criticised. The UK premiere of In the Heights will be staged at the Southwark playhouse from the 9th of May 2014. 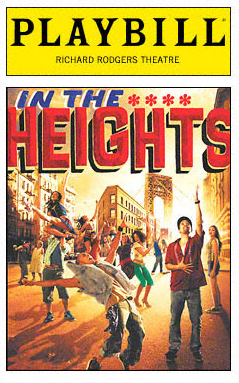 the 1998 film Waking Ned Divine and inspired by the 1993 film It Could Happen to You.

In The Heights Original Broadway Production

In The Heights Original London Production

A young shop keeper observes the inhabitants of his vibrant community.

The show is set in a mostly Dominican-American neighbourhood of Washington Heights, New York. The story begins at first light on the hottest day of the year. Usnavi, the play’s central character opens his store and introduces the neighbourhood (“In the Heights”). Usnavi longs to return to his birth place; the Dominican Republic. Nina Rosario, a local success story, has just returned from her first year at Stanford and prepares to give her parents some news they won’t want to hear (“Breathe.”)

Nina’s parents Kevin and Camila are forced to seek a lone to keep their business afloat, leaving Benny, a friend of Nina’s, temporarily in charge (“Benny’s Dispatch.”) Across the street Vanessa, the object of Usnavi’s desire, dreams of leaving the neighbourhood behind her and escaping to a studio apartment in the West Village (“It Won’t Be Long Now.”) When Vanessa calls into Usnavi’s bodega, his younger cousin Sonny ask her out on a date on Usnavi’s behalf, which she accepts.

When Nina’s parents return she informs them that she lost her academic scholarship and dropped out of college. Nina’s father Kevin is upset that he cannot provide for his daughter (“Inútil Useless.”) Nina turns to her friend Vanessa but Vanessa’s boss, the gossiping salon owner Daniela, turns the conversation to Vanessa’s relationship with Usnavi. Daniela informs them that the salon will have to relocate to the Bronx due to rent increases in the neighbourhood. Nina then reveals to the salon that she has dropped out of university (“No Me Diga.”)

Usnavi discovers that he sold a winning lottery ticket worth $96,000 from his store. The cast dream of what they would do with the money (“96,000”). Abuela Claudia the matriarch of the neighbourhood, who looked after Usnavi after his parents died, reflects on her past and the journey from Cuba to New York in 1943 and discloses to the audience that she holds the winning lottery ticket (“Paciencia y Fé Patience and Faith.”)

Nina and Benny reminisce about the neighbourhood and share their feelings for one another (“When You’re Home.”) Nina’s father announces at a family party that he has sold the business to pay for Nina’s tuition. Vanessa and Usnavi go to a club on their date, they are joined by an angry Benny who has now lost his job, and Nina who is trying to console him. Tensions rise and the club erupts into a fight (“The Club”) before the power goes out. Chaos ensues as Usnavi, Vanessa, Nina and Benny all hunt for each other in the darkness. Sonny and Graffitti Pete attempt to distract any looters from the store by setting off fireworks, Abuela Claudia reveals to Usnavi that she is in possession of the winning lottery ticket. Nina and Benny eventually locate one another and what starts as an argument ends with a kiss (“Blackout”).

Benny and Nina spend the night together. The following morning Nina teaches Benny some Spanish while he worries about what her father will say when he finds out about their relationship (“Sunrise.”) Despite Sonny and Pete’s efforts the store has been looted. Abuela Claudia convinces Usnavi they should use her lottery winnings to move to his homeland, the Dominican Republic (“Hundred’s of Stories”). Nina’s parents have been looking for her all night. When her father finds out she has been with Benny he is extremely angry, he vows that Benny will never be a part of the Rosario family because he is not Latino however Camila steps in and ends the fight (“Enough.”)

The power cut and heat continue but the community are lead by Daniela in one last celebration before the closing of the salon and the Rosario’s car service. Usnavi announces his and Abuela Claudia’s plan to use the money to depart for the Dominican Republic which leaves Vanessa heart broken (“Carnaval del Barrio Neighborhood Carnival.”) Then Kevin announces over the taxi radio the shocking news that Abuela Claudia has died (“Atención Attention”) The neighbourhood holds a vigil for her while Usnavi performs a eulogy (“Alabanza Praise.”)  Usnavi and Nina rummage through a box of Claudia’s keepsakes (“Everything I Know.”) Nina decides to accept the money from her father and return to Stanford. (“No Me Diga Reprise.”)

Daniela reveals that she will co-sign on Vanessa’s dream apartment, after being persuaded by Usnavi (“Piragua Reprise”). Vanessa takes a bottle of champagne to Usnavi to thank him for his efforts but finds him too upset by the death of Abuela Claudia, she kisses him and departs (“Champagne.”) With Nina having decided to return to college Benny is uncertain about the future of their relationship “(When the Sun Goes Down.”) The following morning Usnavi prepares to close up shop when Sonny reveals a mural of Abuela Claudia he commissioned Graffiti Pete to paint on the bodega’s gate. Touched by the gesture Usnavi tells Sonny he’s changed his mind and promises to stay and pursue Vanessa as the block is his true home. (“Finale”)

Nominated for a 2009 Pulitzer Prize for Drama