Everyone’s favourite red headed orphan Annie is based on the comic strip ‘Little Orphan Annie’. The musical was written by Charles Strouse and included lyrics by Martin Charnin. The show has been successful all over the world, with numerous movie and TV adaptations as well as attempts at sequels. The show follows the luck of orphan Annie who finds her luck changes as she is selected to live with a local Billionaire in 1930s New York. 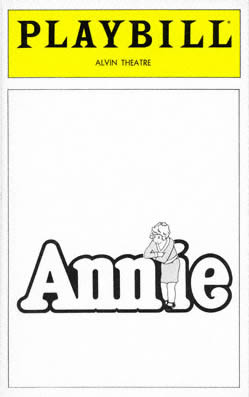 The year is 1933 in the Municipal Girl’s Orphanage in New York. As the girls sleep, Molly, the youngest, awakes from a bad dream in which Annie comforts her the thought that their parents are out their waiting for them. She reads her a note her own parents left on the doorstep of the orphanage along with her 11 years ago, (“Maybe”). Miss Hannigan, the drunken supervisor crawls in and yells at the girls to get back to work. Annie attempts to escape but is caught by Miss Hannigan who then makes the girls scrub the whole building, “Hard Knock Life”. Mr Bundles the laundry man enters and flirts with Miss Hannigan. Annie seizes her chance and jumps into his laundry trolley, escaping into the streets. Miss Hannigan realises she has escaped and is furious.

On the streets of New York Annie runs into a stray dog and calls it Sandy. Annie sings to her about the optimism of ‘Tomorrow’. She runs into a ‘Hooverville’ that has been set up by the homeless due to the Great Depression. The community sing an ironic song to thank President Hoover “We’d Like to Thank You”. Annie caught by the policeman and returned to the orphanage.

Grace Farrell is in Miss Hannigan’s office attempting to arrange for one of the girls to come and live with billionaire Oliver Warbucks as part of his charitable outreach. She spots Annie in the office and begs to take her, contrary to Miss Hannigan’s wishes. Miss Hannigan drinks and moans about her life looking after “Little Girls”.

Annie is welcomed to the Warbucks Mansion by the staff who are delighted to have her and sing “We Hope You Like it Here”. Oliver Warbucks is a moody old man and is not happy about having an orphan. He tries to get Grace to take Annie to the movies, but instead she drags him along to enjoy a trip to “N.Y.C”.

At the orphanage Miss Hannigan’s brother Rooster and his classless girlfriend Lily pay her a visit. Rooster sets about planning how to use Annie’s improved situation to help their own, “Easy Street”.

Warbucks buys Annie a new locket but she refuses to wear it saying she would prefer to hold onto the one she has, which was left with her as a baby and is the only thing she owns from her parents. She is upset about not knowing her parents and Warbucks vows to help her find them, (“You Won’t Be an Orphan for Long”).

In order to find her parents Annie appears on the Bert Healy show where Warbucks offers $50,000 reward to find her mother and father. They sing a fun song, “You’re Never Fully Dressed Without a Smile”. The orphans are listening to the radio and sing their own version but are interrupted by Miss Hannigan who demands to know about the reward. Rooster decides to disguise himself and Lily as Annie’s parents in order to claim the reward. Miss Hannigan helps them by telling them about the locket and the note in order t convincingly pass as her parents.

Warbucks takes Annie to meet President Roosevelt and she sings “Tomorrow” to him, and the whole Cabinet join in with the idea of optimism. Warbucks tells Annie that her loves her (“Something Was Missing”) and tells her he will adopt her (“I Don’t Need Anything But You”). They decide to hold a Christmas party and invite the orphans and Miss Hannigan along.

As the adoption is about to take place, Rooster and Lily enter disguised as Mr and Mrs Mudge. Grace and Warbucks are shocked as they know all about the note and the locket. Warbucks is sceptical and gets a private investigator to look into the case. The Mudge’s tell Annie they will take her back to their Pig Farm in New Jersey. Just as they are about to take her, the investigator reveals that they are impostors and that Annie’s real parents have died. They are arrested along with Miss Hannigan. Everyone rejoices as they hear about Roosevelt’s “New Deal for Christmas”.