Dirty Rotten Scoundrels was a hot Broadway musical that has now been successful all over the world. The show is set to have its London premiere at the Savoy Theatre in Spring 2014. The musical features music and lyrics by David Yazbek and a book by Jeffrey Lane. This musical comedy is based on the 1988 film of the same name which starred Michael Cane and Steve Martin. The original production was directed by Jack O’Brien and choreographed by Jerry Mitchell. John Lithgow and Norbert Leo Butz starred in the original Broadway production, with Lithgow eventually being replaced by Jonathan Pryce. The London production will star Robert Lindsay, Katherine Kingsley and Samantha Bond. 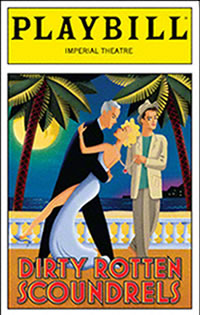 The show opens on the glamorous French Riviera where casino culture rules. Lawrence, a con artist and smooth talking older gentleman begins to work a crowd of elderly women to try and trick them out of their money. He is the centre of attention, and Muriel is particularly keen to speak with him. His bodyguard Andre warns him that a new conman has arrived on the scene, and has been dubbed ‘The Jackal’. Lawrence fears for his position.

Later, on a train, his watches a young fraudster at work. Freddy is trying to trick female passengers to give him money, and Lawrence decides to help him and take him under his wing. He brings Freddy to his mansion house and tells him that he too could live in luxury. Andre tries to warn Lawrence about Freddy but he doesn’t listen. Together they convince a crazy woman that he should not elope to Oklahoma and that his brother, Ruprecht is an awful man.

Lawrence realises that he has met his match with Freddy. He challenges him to a race to secure $50,000 from women, and who whoever loses will be forced to leave town. Christine Colgate arrives on the scene and both men make her their primary target. Freddy pretends to be a cripple and asks for money so he can see a therapist, Dr Shuffhausen. She pledges the $50,000 and Freddy is delighted, although confused when Christine tells him that the Doctor is also staying in the same hotel. They go to meet the Dr and it turns out to be Lawrence.

The second act opens as Lawrence performs painful tests on Freddy’s supposedly numb legs in front of Christine, whilst Andre and Muriel begin to fall in love. Lawrence attempts to woo Christine as the Doctor but suspects that she isn’t as rich as they had both hoped. He asks Freddy to change the bet, saying the winner will be the first to bed Christine.

Freddy has Lawrence kidnapped by sailors and sets on bedding her by pretending her love is the only thing that will heal him. Lawrence escapes and reveals that Freddy is a fraud, and he is then captured by the sailors. Lawrence and Christine head to the train station and it seems like it is too late for Freddy to win. Christine heads to Freddy’s hotel room and the pair fall into bed.

Later she runs to Lawrence’s mansion, claiming that Freddy has tricked her into sleeping with her and running away with the money. Lawrence feels guilty and gives her $50,000 in a suitcase. She refuses the money however and leaves. Freddy arrives saying that Christine actually knocked him out and stole the money. The realise that the money in the suitcase has also been taken, and Christine has left a note revealing that she is ‘The Jackal’. They can’t believe they have been scammed themselves, but the three of them reunite to plot how they can combine forces to scam the audience.