Jerry Springer The Opera came from humble beginnings to be one of the most talked about pieces of theatre in the past decade. Written by comedian Stewart Lee, the opera/musical uses the American chat show format to bring to life a colourful cast of characters and ensemble. After success at the Edinburgh Fringe Festival, Nicholas Hytner, director of the National Theatre, used the piece in his inaugural season at the London venue which sparked much controversy. The adult nature of the script, combined with profanities both spoken and sung made this a highly controversial piece of theatre. The decision by the BBC to broadcast the opera upset many, and pickets were organised outside each theatre as it completed a UK tour. The show was fully endorsed by Jerry Springer himself and has achieved a cult following around the world. 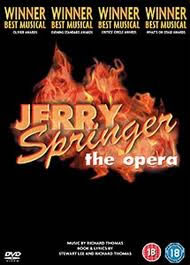 Jerry Springer hosts a daytime talk show which is renowned for its over-the-top guests. On this show, Dwight arrives to tell his girlfriend Peaches he is cheating on her with Zandra. The three fight and have to be broken up by Jerry’s security team. Dwight reveals he is also having an affair with transsexual Tremont.

Jerry’s next guests are Montel, who explains to his girlfriend Andrea that he enjoys dressing up as a baby and is cheating on her with Baby Jane, a grown woman who dresses up like a little girl. Jerry’s Warm-Up-Man humiliates Andrea, and Jerry promptly fires him. Jerry’s final guests are Shawntel and her husband Chucky. Shawntel wants to be a stripper, but her mother Irene arrives and attacks her for humiliating the factory. Chucky says he had no idea Shawntel was a stripper, but a secret camera reveals he has visited strip clubs and is also a Ku Klux Klan member. The Klan arrives in support of Chucky, and the disgruntled Warm-Up Man gives Montel a gun, and causes him to accidentally shoot Jerry.

Jerry heads to Purgatory with his security guard Steve, where he is confronted by the ghosts of his former guests. He tries to justify his actions on earth to no avail. The Warm-Up Man reveals himself to be Satan, and Baby Jane pleads for Satan to save Jerry’s soul. Satan does not relent and sends Jerry to hell to perform a version of his show.

In hell, Jerry must read the cue cards Baby Jane shows him. Satan wants an apology from God for banishing him from Heaven. Guests arrive, all resembling people who appeared on the show in the first act. The first is Jesus, resembling Montel, who argues with Satan. Adam and Eve arrive, who are similar to Chucky and Shawntel. They fight with Jesus before Eve physically assaults him. The Virgin Mary enters next, and condemns her son Jesus. Everyone eventually turns on Jerry, blaming him for their problems.

God arrives to ask Jerry to come to Heaven with him, but Satan challenges God for Jerry’s soul. He is suspended over a pit of fire while they debate, and Jerry pleads for his own sole before making an impassioned speech about his life’s work. Satan finally relents and Jerry is sent back to earth. He wakes up back in the studio just after being shot, dying in Steve’s arms. Everyone mourns his death as he makes one final speech.