Hair: The American Tribal Love-Rock Musical is unique musical that changed the face of musical theatre during the late 1960s. Featuring music by Galt MacDermot and book and lyrics by James Rado and Gerome Ragni, the musical portrays the hippie culture of America in the 1960s around the time of the US involvement with Vietnam. The show features nudity, sexual acts, profanity and drugs and became an overnight sensation. This new type of ‘Rock’ musical helped pave the way for other shows in the later decade. Featuring a non linear narrative the show was one of the first ‘concept’ musicals and invited the audience on a remarkable journey. 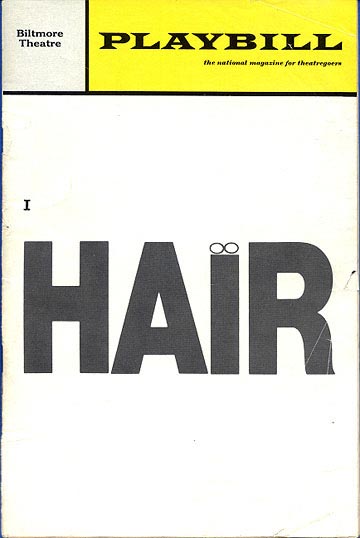 Claude and his tribe of young, free spirits announce it is the dawning of the age of “Aquarius.” Claude himself is looking for a girl to love named “Donna.” Members of the tribe praise the virtues of “Hashish” and “Sodomy.” They also celebrate what they do not have and the value of having a simple life (“Ain’t Got No”).

Sheila arrives and chants in protest at war (“I Believe in Love”). A pregnant woman, Jeannie sings about pollution (“Air”). Members of the tribe dress as Claude’s parents and berate him for not having a job and wasting his life and declare that the army will sort him out. He celebrates the tribe’s embracing of life rather than society’s expectations (“I Got Life”). He is then drafted into the Vietnam War and is torn about what to do.

Two tribe members dress as tourists who question the others about their long hair. The entire tribe breaks into a celebration of the symbolism of their “Hair.” Sheila and Berger, a mischievous member of the tribe, reveal their complicated romantic history. Everyone attends a “Be-In” in protest of the war, at which the men burn their draft cards apart from Claude who still questions what to do (“Where Do I Go?”).

The tribe acts out scenes from Claude’s induction into the army. The women of the tribe explain their love of “Black Boys” and “White Boys.” Berger gives Claude hallucinogenic drugs and he has a trip that has him meet famous Americans throughout history, including George Washington, General Custer, Abraham Lincoln, and recounts the often violent history of the country’s progress. Buddhist monks and Catholic nuns arrive and murder each other in a symbolic vision of how religion has been used to justify wars. Amidst the growing pile of dead bodies, the remaining members of the tribe reflect on “What a Piece of Work Is Man.”

In the aftermath, Claude disappears, while Sheila leads the tribe in “Good Morning Starshine.” Claude arrives in his military uniform, but he is now invisible to the others. The tribe begins to sing “Let the Sun Shine In” jubilantly before revealing Claude, now dead after being killed in action.