Gypsy features a score by Jule Styne with lyrics by Stephen Sondheim and book by Arthur Laurents. The musical is often referred to as one of the greatest musicals of the classic Broadway period, and its phenomenal Overture is recognisable to all theatre fans. The show is loosely based on the 1957 memoirs of striptease artist Gypsy Rose Lee, in which Rose is the show business mother who pushes her children into the limelight. The character of Rose is one of the most sought after roles in musical theatre, and numerous productions have highlighted the best Broadway stars including Ethel Merman, Patti luPone, Bernadette Peters and Tyne Daley. 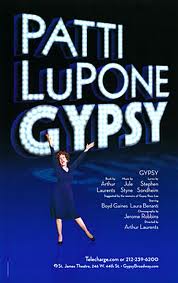 the Memoirs of Gypsy Rose Lee

Formidable stage mother pushes her daughters to succeed as one accidentally becomes a stripper making her Mama question her motives and life.

In the early 1920’s Rose and her two daughters Baby June and Louise play the vaudeville circuit, pushed by Rose’s ambitions and aspirations for her daughter. Rose is a fierce stage mother who pushes her children, in particular June who acts as the centrepiece for each act. Every act features the same song under a different disguise. Rose wants the girls to travel to Broadway and dreams that the act can really take off, but her father refuses to help her out financially. She meets an old theatre agent Herbie and uses her charm to win him as their manager. As the girls get older, their act rarely changes and they become a travelling troupe. They eventually get to perform to Mr Goldstone, a huge vaudeville manager of the Orpheum circuit. Rose rejects Herbie’s proposal of marriage, putting all of her energies into the act, that continues to stay the same despite the growing ages of the girls. Louise and June are unhappy with their lives and often fantasize about what it would be like if ‘Momma Was Married’ and they led a normal life. Tulsa, a chorus boy from the act shows Louise his own dancing skills and persuades her to run away with him. She leaves a note for her mother that the two have eloped. Rose is furious, but turns her fortunes around as she promises to make Louise a star instead.

As the vaudeville industry continues to fade away, Louise is now a lot older and still forced to perform in an act similar to Baby June’s. Rose and Herbie continue to try and sell the act, but with few venues left they are reduced to a burlesque house in Kansas. Whilst Rose is offended, Louise looks on the positive side that they will get paid for two weeks. Louise shares a dressing room with three strippers who teach her how to get a gimmick in order to succeed. Herbie proposes to Rose again and she accepts, and she promises to close the act and lead a normal life. As a stripper drops out, Rose seizes her opportunity, forcing Louise back into the spotlight. Herbie is disgusted at Rose’s behaviour and walks out on her forever. Louise reluctantly agrees and tries not to strip, but her teasing drives the audience wild and she becomes highly successful. She continues to get more successful, and becomes a burlesque star, rejecting help from her mother. Rose realises that June, Herbie and now Louise have left her and her life is now meaningless. She asks what it was all for, delivering the biggest number in the show ‘Rose’s Turn’. She fantasizes about her own success and realises that she did it all for herself. She tries to reconcile with Louise, but to no avail.