Gigi tells the story of a young French girl raised to be a courtesan who instead opts to get married. This musical hit started out as a novel by the famous French author Colette and was made by Anita Loos into a non-musical stage production in 1951 before becoming an Oscar-winning musical film in 1958. It was adapted into a Broadway Musical in 1973 after the Film version won 9 Academy Awards by Lerner and Loewe, although its Broadway début failed to live up to the success of the film. After short runs in both London and New York, the stage show was surpassed by the screen version, until a new production was mounted at the Regent’s Park Open Air Theatre and quickly became one of the biggest shows of the season. 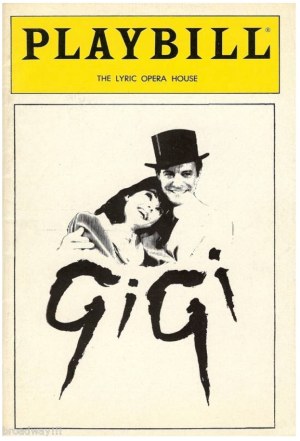 the novel by Colette and the MGM film

In Belle-Epoque Paris, Honoré Lachaille is a elderly gentlemen with very few cares in the world and plenty of money to spend. He reflects on his womanizing past and pauses to “Thank Heaven for Little Girls.” His nephew, Gaston, is just as wealthy and also has an eye for the ladies, but he is growing tired of his charmed life as “It’s a Bore.” He begins spending time with Honoré’s former lover, the eccentric Madame Alvarez, who he calls Mamita, in an effort to get closer to her beautiful granddaughter Gigi.

Mamita sends Gigi to her Aunt Alicia’s finishing school to become a high-class courtesan, just as the women in their family have always done. Gigi finds her lessons difficult and does not understand the meaning of love or why Paris seems obsessed with it. She enjoys spending time with Gaston, but views their relationship as platonic. Alicia and Mamita concoct a plan to set Gigi up as Gaston’s mistress, an arrangement Gigi remains blissfully unaware of. She continues her lessons, but is clearly still an awkward young girl.

Gaston soon falls in love with Gigi, but she says she does not want to become anyone’s mistress only to be tossed aside when a prettier girl comes along. Gaston is shocked that she thinks of him this way, but is unable to convince her that he will change his ways. Gigi, though, has a change of heart and realises she wants to be with Gaston, even if only as his mistress.

Gaston takes Gigi out to dinner for the first time in one of Paris’ most exclusive restaurants. For the first time, he notices that Gigi is no longer the awkward teenager and has evolved into a beautiful and elegant woman. He decides that he does not want her to be only his mistress, and proposes marriage, which she excitedly accepts.