Once Upon a Mattress features music by Mary Rodgers along with lyrics by Marshall Barer and book by Jay Thompson and Dean Fuller. The musical original started life off-Broadway, before coming to the mainstream theatre in 1959. The script is based on the classic fairy tale ‘The Princess and the Pea’ and features a number of catchy songs in an otherwise overlooked show. The musical has never been particularly popular in Britain, although it remains popular with American high schools and summer camps. The show had a revival in 1998 starring Sarah Jessica Parker in her first musical theatre role. 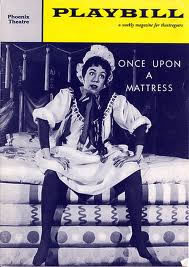 The Princess and the Pea, a popular children’s fairytale by Hans Christian Anderson

The musical is set in a medieval kingdom ruled by Queen Aggravain and the mute King Sextimus. The Minstrel acts as the narrator and begins to tell the tale of the Princess and the Pea which differs somewhat from the tale we all know and love. The Princess was actually one of 13 tested by the Evil Queen. We see the 12th Princess being tested with an impossible quiz and she fails the final question that would be impossible for her to answer. The Queen has created a law in the town that says no one can wed until Prince Dauntless shares his wedding bed, but she is unwilling to let any girl be good enough for him.

One of the Knights Sir Harry realises that his girlfriend Lady Larken is pregnant and they are worried about the consequences. Larken says she will run away to hide her pregnancy but Sir Harry says he would rather try and find a suitable Princess himself to lift the town from the law. He tries to convince the Queen who is persuaded by the Prince to let him help. Princess Winnifred the Woebegone, an unrefined Princess travels to the castle and charms the court, but is instantly disliked by the Queen. The mute King finds out about the pregnancy and mimes it to his Jester and Minstrel, telling them to to say a word.

The Queen devises another impossible task helped by her Wizard companion. They plan to put a tiny pea underneath the 20 thick mattress to see if the Princess is sensitive enough to marry her son. Winnifred tells the Prince and court about her home in the marshlands and everyone instantly likes her. Lady Larken fights with Harry and promises she will run away. The King attempts to stop her running away but then lets her escape to Normandy. That night the Queen hosts a ball making Winnifred dance the hardest dance possible, ‘The Spanish Panic’, but instead of collapsing herself, everyone else becomes a victim. Dauntless tells her that he loves her.

During the night the Queen sets up the 20 mattresses for her challenge. She spots Larken running away as the Minstrel tries to protect her. Winnifred and Dauntless study for the test and she complains about wanting a ‘happily ever after’. Meanwhile the King has a man to man talk with Dauntless about the birds and the bees through mime.

Lady Larken and Sir Harry confess that their love is as strong as ever as Winnifred passes the test and has a restless night on the bed. The Queen desperately tries to find a way to make the test invalid, but Dauntless yells at her telling her to ‘shut up’. This act of anger breaks the curse on the King and makes the Queen become mute, as the King lets Dauntless marry Winnifred. They force the Queen to hop around the room as punishment.

It is revealed that the only reason Winnifred passed the test is because the Jester heard of the plan and planted metal weapons on each layer to give her trouble sleeping. He then removes them but Winnifred still struggles to fall asleep, even with just the pea disturbing her. As she falls asleep everyone lives happily ever after.