Dreamgirls is the smash-hit, Tony Award-winning musical which premiered on Broadway in 1982, starring award-winning actress Jennifer Holliday as the iconic Effie White. Since its premiere, Dreamgirls has enjoyed several revivals across the world, including tours in the US, South Africa, Malaysia, Australia and Colombia. Never before seen in London, the production opens at the West End’s Savoy Theatre in 2016, starring Glee’s Amber Riley. In 2006, the musical was made into a film starring Beyoncé Knowles, Jennifer Hudson and Jamie Foxx. Including well-known songs such as “One Night Only”, “Cadillac Car”, “And I Am Telling You I’m Not Going” and “I Am Changing”, Dreamgirls is one of the world’s best-known and best-loved musicals. 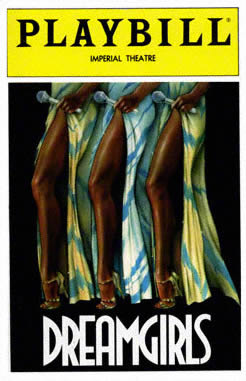 Rumoured to be based on Diana Ross and the Supremes

Broadway’s smash-hit musical following girl group The Dreamettes as they make it big and become Deena Jones and the Dreams.

Set in the heart of Chicago in 1962, and widely speculated to be based on the real journey of Diana Ross and the Supremes, Dreamgirls follows a trio of young girls as they enter a talent competition in the hopes of making it big. The Dreamettes feature best friends Effie White, Deena Jones and Lorrell Robinson, with Effie as lead singer. Singing a song written by Effie’s brother C.C., the group unfortunately lose the contest, but are met by Curtis Taylor, Jr, a used-car salesman.

Once Curtis becomes the group’s manager, he convinces James “Thunder” Early to let them be his backing singers, becoming a huge success. Soon, Curtis persuades Jimmy and the Dreamettes to move away from Rhythm and Blues and over to pop, where they are usurped by white groups. Curtis begins to bribe DJs to play Jimmy’s next single, which becomes a major hit.

However, things begin to get slightly more complicated once Effie and Curtis begin dating, and Jimmy and Lorrell begin an illicit affair. Curtis soon replaces Marty as Jimmy’s manager, who also helped write the songs for the group. Quickly, Curtis tries to transform Jimmy into a Perry Como-esque singer, whilst establishing the Dreamettes as their own act. Renaming the girls The Dreams, Curtis puts Deena as lead singer, due to her more appealing looks and pop vocals. Effie is hurt, but C.C. convinces her to go along with the plan. The Dreams make their debut in Ohio, with Curtis informing Deena that he’s going to make her the star.

Over the years, Deena becomes a superstar and The Dreams become a huge pop success, but Effie starts to miss rehearsals, becoming temperamental and suspecting Deena and Curtis of an affair. Lorrell attempts to keep the peace, but the group soon splits and Curtis replaces Effie with Michelle Morris. The Dreams leave Effie behind, despite her heartbroken appeal.

In Act II, the action moves forward to 1972, where Deena Jones and the Dreams have become the country’s leading pop group. Deena has married Curtis and C.C. is in love with Michelle, although Jimmy has long since disappeared. Effie is back in Chicago and it is revealed that she was missing shows and rehearsals due to being pregnant with Curtis’ child, who she now looks after by herself. Marty has become her manager and is attempting to help her make a comeback.

Deena decides that she wants to pursue an acting career, without Curtis as her manager. C.C. has become annoyed by Curtis’ constant rearrangements of his songs and the tension begins to build. Whilst waiting to perform at a fundraiser, Deena Jones and the Dreams meet Jimmy Early once more, and Jimmy finds himself locked in another argument with Lorrell. With Lorrell in tears and Deena attempting to comfort her, Michelle convinces C.C. to reconcile with Effie, and Jimmy’s set falls apart on stage.

C.C. and Effie meet at a recording studio, and C.C. apologises to Effie for hijacking her career. Effie records C.C.’s emotional “One Night Only” ballad, which begins to climb the charts, much to the chagrin of Curtis, who threatens legal action. As Curtis makes arrangements to ruin Effie’s career, Effie and Deena reconcile too, and Deena learns that Effie and Curtis share a child. Realising the kind of man Curtis really is, Deena finds the courage to leave him. Once “One Night Only” has become a hit, Deena leaves The Dreams to become an actress. For the final number of The Dreams’ farewell concert, Effie joins the girls on stage.