Beautiful: The Carole King Musical is the Tony and Olivier Award-winning musical that has been entertaining audiences since 2014. A smash-hit both on Broadway and in the West End, Beautiful has been commended by Carole King herself. Featuring some of her best-known songs such as “(You Make Me Feel Like) A Natural Woman”, “Beautiful” and “I Feel the Earth Move”, the musical continues in London to rave reviews and packed out audiences. Following the real life of Carole King, the show documents her development from songwriter to singer, as well as her tumultuous relationship with collaborator and husband Gerry Goffin. 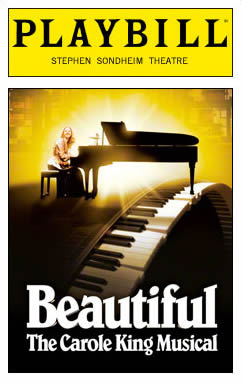 The real life of Carole King and her music

Smash-hit musical follows the life and times of legendary artist Carole King, including some of her well-known hits.

Beautiful opens on stage at Carole King’s legendary Carnegie Hall concert in 1971, with Carole singing “So Far Away”. The musical then quickly rewinds to 1958 and to a 16-year-old Carole telling her mother, Genie, that she wants to become a songwriter. Genie is opposed to her daughter’s desires, but Carole goes ahead with her plans to try and sell a song to music publisher Don Kirshner. At 1650 Broadway, she sings her new song “It Might As Well Rain Until September”, and Don says he will take it and hopes she has others.

At Queen’s College, Carole meets lyricist Gerry Goffin, and together the pair begin to collaborate both musically and romantically, which reaps the rewards for both of them. When Don asks to hear their new song, Carole confesses to Gerry that she is pregnant and Gerry asks her to marry him. After this, their new song “Some Kind of Wonderful” takes on a whole new meaning, and The Drifters record a hit.

Carole and Gerry get an office at 1650 Broadway, where Carole meets lyricist Cynthia Weil, who is looking for a composer. Whilst Gerry and Carole practice “Take Good Care of My Baby”, composer Barry Mann enters, meets Cynthia and the pair begin their own collaboration. As they begin to work, sparks fly and Don asks both of the couples to present him with a song for The Shirelles. Carole and Gerry present “Will You Love Me Tomorrow” and Cynthia and Barry perform “He’s Sure the Boy I Love”. Don chooses the former and the song rockets to the top of the charts. Soon, the couples are firing out an amazing selection of songs, despite being quite competitive. When Gerry and Carole tape a TV special of their new song with Janelle Woods, Gerry confesses that he is restless in the pair’s marriage and wants to sleep with Janelle. Not wanting to lie about it, he leaves Carole stunned and she moves to sing Janelle’s song.

Act II begins with Carole in a recording studio, performing a demo of “Chains”, whilst Gerry is away with Janelle. Nick, a guitarist, asks Carole to come and sing for him, but she declines as she does not want to be a singer. Carole talks to Cynthia about Gerry, as she is also having problems with Barry and Carole decides to split from Gerry. After their meeting, Gerry appears and has a breakdown which sends him to hospital. He tells Carole he will end the affair with Janelle, and Carole suggests they make a new start in the suburbs.

Don, Barry and Cynthia arrive to visit the couple and play them their new song, which makes Gerry realise that he needs to go back to the city. Once he has gone, Barry and Cynthia reveal that they have seen him with singer Marilyn Wald. Carole goes to Marilyn’s house and Gerry is there. She makes the decision to end her marriage. Soon, Carole begins to sing and decides to move to Los Angeles to pursue a new career, leaving her friends behind.

In Los Angeles, she records her legendary album “Tapestry”, including “(You Make Me Feel Like) A Natural Woman”, which she originally wrote with Gerry. The album is a smash-hit and the action flashes forward to Carole King’s Carnegie Hall concert. Gerry knocks on the door with an apology for the way he treated her and wishes her well. Carole sits at the piano and performs “Beautiful”.