Aladdin the Musical is the award-winning musical that continues to wow audiences on Broadway and the West End, with its memorable music, spectacular sets and glittering performances. Based on the 1992 Disney animated film of the same name, Aladdin the Musical is the well-known story of a street urchin who is persuaded to find a magic lamp, which contains an even more magic Genie! Including famous songs such as “Friend Like Me”, as well as the Academy Award-winning “A Whole New World”, composed by Disney mastermind Alan Menken, Aladdin the Musical is a smash-hit success. James Monroe Iglehart and Trevor Dion Nicholas, who play Genie in the US and UK respectively, have been earning praise from audiences and critics alike. 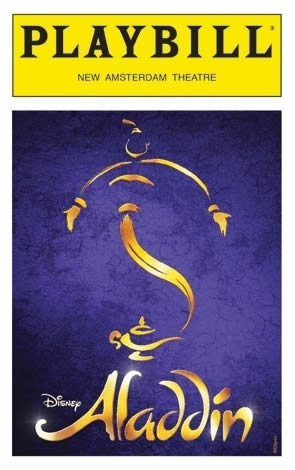 Disney’s timeless story of a street urchin who finds and befriends a magic Genie and has his life completely transformed!

Based on the tales of 101 Arabian Nights, Aladdin the Musical is the spectacular Broadway musical adapted from the smash-hit award-winning 1992 Disney classic of the same name. Following street urchin Aladdin, who is used to stealing from the market place, he only wishes that he could make his mother proud by doing something more worthwhile. With help from his friends; Kassim, Omar and Babkak, Aladdin attempts to earn some money by dancing in the streets, where he bumps into a disguised Princess Jasmine.

Jasmine is confined within the palace walls day after day, and longs to be free to explore her city. With her father, the Sultan, attempting to organise an arranged marriage between her and a rich Prince, she just wants to run away. Disguising herself, she escapes to the market place, where she runs into Aladdin. The pair immediately fall under each other’s spell, but when some angry guards appear, they are forced to flee to Aladdin’s humble home. Together, they dream of a better life where they are free to do as they wish.

Meanwhile, evil Jafar and his sidekick Iago are plotting ways to overthrow the Sultan, and they come across the story of a magic lamp locked away in the Cave of Wonders. Inside this lamp is rumoured to be a magical Genie who can grant any wish, but the only person that can enter the legendary cave is an alleged Diamond in the Rough. Iago asks the spirits to show him the mysterious Diamond, and Aladdin is revealed.

Jafar and Iago go to the market place and quickly persuade Aladdin to help them, by telling him that it will finally be a way to make his mother proud, and they will make him rich for his efforts. Aladdin goes into the Cave of Wonders and discovers the magic lamp. Although he has been told not to touch anything else in the cave, his curiosity gets the better of him and he picks up some golden treasures. When the cave entrance slams shut, Aladdin has nothing to do and ends up rubbing the magic lamp. Soon, Genie appears and says he will grant Aladdin any three wishes his heart desires.

Aladdin first wishes to be free from the cave, followed by a wish to become a Prince to win the heart of Princess Jasmine. Disguised as Prince Ali, Aladdin enters the palace and impresses the Sultan, much to the annoyance of Jafar. Unfortunately, Aladdin comes across as far too cocky in his new guise, and Jasmine is less than impressed. Attempting to woo her, Aladdin takes her on a magic carpet ride, revealing his true identity.

Unfortunately, Jafar soon realises Prince Ali’s true identity, and stealing the lamp, has Aladdin and his friends locked up in the palace dungeon. But they all work together to overthrow the nasty Jafar, and the Sultan agrees that Aladdin can marry Jasmine as thanks for saving the city. As his third and final wish, Aladdin wishes that Genie can be free of living in the lamp!