Victor/Victoria is based on the 1982 film of the same name. The musical features a book by Blake Edwards along with music by Henry Mancini and lyrics by Leslie Bricusse. Composer Mancini dies before the show was completed, so Wildhorn was brought on-board to finish off the score. The original Broadway production in 1995 starred Julie Andrews, who famously turned down her Tony Award nomination, as she thought the whole show had been overlooked. During her break with the production Liza Minelli took over the role. Andrews was taken to hospital for surgery on her voice, after she suffered with nodules, leaving her with bad vocal problems for the rest of her life. The musical follows a soprano Victoria who disguises herself as a man, Victor, becoming the toast of Paris. 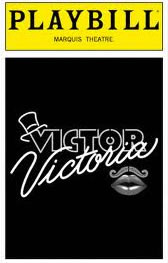 the screenplay of Blake Edwards 1982 Film

In 1934 Paris we first see Richard Di Nardo, a young rent boy get up out of the bed of the gay middle aged Toddy’s bed. Richard takes money from his wallet and leaves whilst Toddy is asleep. Toddy works as a performer at the Chez Lui in Paris, and sees the club manager Labisse auditioning an impoverished soprano by the name of Victoria Grant. Labisse writes her off, but she sings a note high enough to shatter his wine glass. Richard arrives at the club that night as part of a straight group of four and Toddy insults him in front of the women, getting himself fired from the club. Leaving in a rush, he notices Victoria dining at a nearby restaurant and joins her. They are both poor and so try to avoid paying the bill by dumping a cockroach in their food, which results in mayhem.

Victoria goes to stay with Toddy and borrows his clothes after hers are ruined by the rain. Richard stops by to pick up his things, and is confused when he sees Victoria in Toddy’s clothes, mistakenly thinking she is a man. This gives Toddy an idea and he presents her to Andre Cassell talent agency to pass her off as a female impersonator. He accepts her as Count Victor Grazinski – a gay Polish female impersonator and boyfriend of Toddy. She begins a nightclub show and catches the eye of King Marchand, a club owner from Chicago. He refuses to believe that she is man.

He sneaks into Victoria’s suite and sees her getting undressed but keeps his knowledge secret. They all go back to Chez Lui where Victoria is welcomed as a star, but a fight breaks out once again and Toddy is arrested leaving King and Victoria to slope off together. Squash, King’s bodyguard finds the two in bed together and as King tries to explain the situation, Squash reveals himself to also be gay. Labisse hires an investigator to find out the truth about Victor. As Victoria and King continue to live together, his girlfriend Norma tells his club partner that King is having a gay affair with Victor.

Victoria decides to give up the persona in order to live together with King, but King’s partner forces him to sign over his half of the business. Victoria shows Norma that she really is a woman to stop King from losing his career. Toddy and Victoria discover that Labisse has complained that Victor is a fraud, but the Inspector confirms that he is a man.

Victoria performs at King’s club as her real self an goes down a storm. Toddy masquerades as Victor, but is a disaster and he claims this will be his last performance.

1996 Tony Award Nominations: Julie Andrews caused controversy by turning down the only Tony Nomination for Best Actress. She felt the whole production had been overlooked and didn’t want to be the only person singled out of the show.