Bye Bye Birdie features music by Charles Strouse with lyrics by Lee Adams and book by Michael Stewart. This popular musical is a satire on American society in the early 1960s surrounding the teenage obsession with singers such as Elvis and the rock’n’roll movement. As teenage idol Conrad Birdie is conscripted into the Army, a legion of fans fight for publicity one last time. The original Broadway production won the Tony Award for Best Musical and spawned successful revivals and national tours. Although the show has never done as well in the UK, it is a popular choice for American High Schools, Summer Camps and colleges. 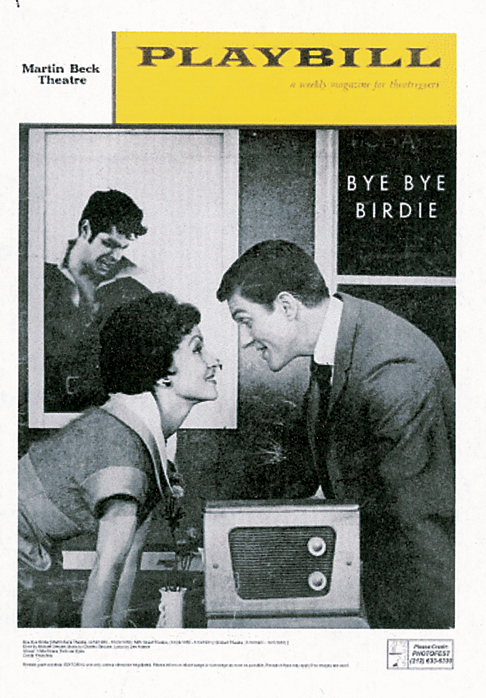 Conrad Birdie, an Elvis-like pop icon, is drafted into the Army, much to the chagrin of teenaged girls everywhere and his beleaguered agent, Albert Peterson. Albert’s girlfriend Rosie comes up with a plan to give away Conrad’s “one last kiss” before heading to war to a member of his fan club. In return, she hopes Albert will take the opportunity to finally pursue his ambition of becoming “An English Teacher.”

Teenager Kim MacAfee from Sweet Apple, Ohio is the lucky girl chosen out of thousands to be kissed by Conrad on live television. He and his entourage descend on the small town, already abuzz with the news that Kim and Hugo Peabody are finally going steady (“The Telephone Hour”). As they depart New York City, Albert is mobbed by teenagers who are devastated that Conrad is joining the army, but he encourages them to “Put On a Happy Face.”

Reporters flock to the tiny town wanting to speak to Conrad, but Albert and Rosie deflect the attention and try to assure the public that he is just “A Healthy, Normal, American Boy.” Hugo becomes worried that Kim is more interested in Conrad than him, but she assures Hugo that he’s the “One Boy” for her. Conrad sings “Honestly Sincere,” which works the teenaged girls into a frenzy and only fuels Hugo’s jealousy further.

As part of the publicity stunt, Conrad moves into the MacAfee household, drawing the ire of Kim’s father with his rock star antics. Albert manages to convince Mr. MacAfee to allow Conrad to stay by assuring him the entire family will appear on the Ed Sullivan Show, the most popular television programme in the country (“Hymn For a Sunday Evening- Ed Sullivan”).

To add to Albert’s problems, his overbearing mother, Mae, arrives in the hopes of breaking up his relationship with Rosie, who she dislikes because she is Hispanic. Mae brings Gloria Rasputin with her, a voluptuous and ditzy blonde she met on the bus who she suggests as a replacement. Rosie becomes infuriated with Albert’s coddling of his mother and imagines “How to Kill a Man” in a ballet.

Conrad and Kim finally appear on the Ed Sullivan show for “One Last Kiss,” which is interrupted at the last minute by Hugo running onstage to punch Conrad in the face. Mortified, Kim and Rosie decide to leave Hugo and Albert, singing “What Did I Ever See in Him.” Unfazed, Conrad convinces Kim and the teenagers they all have “A Lot of Livin’ to Do” and brings them to the Ice House, where a party is going on without adult supervision. On discovering Kim has run away, Mr. and Mrs. MacAfee bemoan what’s wrong with “Kids” these days.
Meanwhile, Rosie finds herself in a roadside tavern that’s hosting a Shriners meeting, hoping to forget about Albert. She begins to flirt with the members and begins to dance with them before being rescued by Albert, who declares his love and finally stands up to his mother. The parents discover their children have gone to the Ice House and have Conrad arrested. Kim realises she was being foolish and decides to return to Hugo.

Rosie confronts Mae for her racism in a tongue-in-cheek performance of “Spanish Rose.” Albert manages to bail Conrad out of jail and dresses him as a woman to sneak him out of town, putting his mother on the same train back to New York. He reveals to Rosie that he has accepted a job teaching English in Iowa, and they happily decide to get married.