Once on This Island comes from the writers of ‘Ragtime’, Stephen Flaherty and Lynn Ahrens as is based on the 1985 novel ‘My Love, My Love’. The show is set in the French Antilles in the Caribbean and is known by many people as the Caribbean retelling of The Little Mermaid. An orphaned girl brings together two feuding worlds by falling in love with a boy from a different social class. The people of the island are watched over by the Gods of Love, Earth, Water and Death and pray to them to help their lives. The show is often performed by amateur theatre groups, and is a useful tool to explore class, gender and racial differences. The London production won the Olivier Award for Best New Musical. 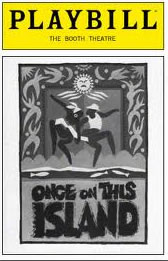 My Love, My Love by Rosa Guy

Once on This Island - Original Broadway

Once on This Island - Original London

Once on This Island - London Revival

The story begins on a dark stormy night where a small girl cries in the dark. The villagers tell her the story of Ti Moune, a peasant girl who fell in love with a grand homme, Daniel. Although they were from two different walks of life, they were brought together through the intervention of the four Gods: Asaka, Mother of the Earth; Agwe God of Water; Erzulie goddess of love; and Papa Ge the sly demon of death. On one side of the island the dark skinned peasants live in poverty, and on the other the lighter skinned Grand Hommes, descendants of French planters. Ti Moune is saved after Agwe unleashes a storm on the villages and is found by Mama Euralie and Tonton Julian.

As Ti Moune grows up she is bored of life, and prays to the gods to hear her prayer and bring something exciting into her life. The Gods laugh but Erzulie decides to give her love, saying it is the strongest force of nature. Agwe sends a rainstorm that results in a car crash and Ti Moune saves Daniel from the accident. None of the other peasants want to help save him, but Ti Moune falls in love with him and swears to look after him. Papa Ge arrives to take his life, but Ti Moune trades her own life for his. She now belongs to Papa Ge.

Daniel returns to the land of the Beauxhommes and Ti Moune is devestated. She decides she will travel to see him so they can get married. She is helped on her journey by the gods who give her the gifts of nature and love to aid her journey. As she arrives at the palace, Daniel does not recognise her. She describes the scar on his chest and he slowly remembers. He begins to fall in love with her again and the peasants gossip about the relationship between a rich Beauxhomme and a peasant girl.

At a ball held by the upper levels of society, Andrea, Daniel’s intended, makes Ti Moune dance to try and humiliate her. She dances for the gathered crown who are impressed by her, but she finds out that Daniel is betrothed to Andrea against his wishes. She is heartbroken, and Papa Ge arrives to remind her that her life belongs to him. He tells her that she can only revoke the bargain if she kills Daniel. She sneaks into Daniel’s room with a knife, but can’t bring herself to kill him, proving Erzulie’s point that love is always stronger than death. She is thrown out of the palace but she waits for days at the gates to see Daniel, just as Daniel and Andrea are married. Ti Moune is ignored by Daniel, but he places a coin in her hand, as is the tradition of giving peasants money after a wedding. Erzulie guides her to the ocean and Agwe allowed her to drown peacefully. Papa Ge then took her body back to shore where Asaka transformed her into a tree and the gates of the hotel Beauxhommes. It becomes a symbol of freedom and life and the show ends as we see Daniel’s son meet another peasant girl and the story is told again and again.