Aida is based on Verdi’s opera of the same name. Now entitled Elton John and Tim Rice’s Aida, the production marked the third Broadway outing for Walt Disney Theatricals after smash-hit successes Beauty and the Beast and The Lion King. As well as a score by Elton John and Tim Rice, Aida features a book by Linda Woolverton, who has worked on previous Disney successes. Opening on Broadway in 2000, the musical ran for almost 2000 productions, receiving a mixed response from audiences and critics. Although considered to be a huge financial success, the show never transferred to London. Heather Headley became a star thanks to Aida, winning a Tony Award for her portrayal of the title role. 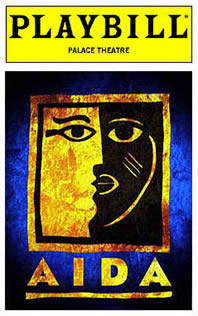 A Nubian slave is captured by an Egyptian Captain who falls in love with her and gives her as a gift to a Princess, creating a love triangle.

Aida opens in a modern day museum amongst the Egyptian artefacts. A statue of Amneris, a female Pharaoh comes to life, taking the story to Ancient Egypt, where the Egyptian army have returned from a successful expedition through Nubia. Led by Radames, the army makes its way back to the palace, but Radames is captivated by one of the Nubian women Aida, and asks her to wash his back. She refuses, saying that whilst Egypt steal everything from Nubia, they won’t take her pride. Radames sends her to be a handmaiden to his betrothed Princess Amneris. Radames’s father prepares him to take over as Pharaoh, not telling his son that he is accelerating his death by slowly poisoning him.

Whilst handing over Aida to Amneris, she is recognised by Radames’s Nubian servant as a Nubian princess. She silences him, telling him that her identity must remain secret or she will die. Amneris takes to Aida straight away and shares her love of fashion with her, befriending her. The Pharaoh tells Amneris and Radames that they are to be married in seven days and Radames is upset that his youthful life is coming to an end and shares his dreams with Aida.

Amneris confides in Aida about her father’s ill health, Radames steals a moment with Aida and tells her that he has developed feelings for her. Aida is then led to a Nubian camp where her people ask her to lead them to victory. Aida goes to Radames and asks him to help her people, and he gives some of his possessions to them and sings about his love for Aida. Aida and Radames embrace, unable to restrain their feelings any longer. They are interrupted by the news that Aida’s father, the king of Nubia, has been captured. Aida has faith that her people and Nubia won’t die.

As Act II opens Aida, Radames and Amneris are locked in a conflicting set of loyalties and actions. Aida manages to get to see her father and they plan to free him during the wedding ceremony of Radames and Amneris. Aida realises that the only way she can save her father and Nubia is to betray her father. Radames’s father finds out about his affair with Aida and order his men to kill her, warning his son about losing the throne. Radames writes to Aida apologising for his behaviour, but Aida is ready to leave him forever. Radames tells Aida that he is going to leave Amneris, but Aida knows this wont help her father and encourages him to go through with the marriage. Radames promises to help Aida escape but Amneris has overheard the whole conversation.

Aida’s father escapes, but the plan is foiled and Radames intervenes by letting his boat set sail. Aida and Radames are arrested for treason, and Amneris uses her powers as future Pharaoh to get them both buried in the same tomb so they can be together. As they are buried together, they swear to each other that they will find one another in a future life. Nubia and Egypt are no longer at war, as the couple die underground.