Blitz! features a score by Lionel Bart, renowned composer of ‘Oliver!’. The musical is set in the East End of London during the Second World War, and takes its name from the aerial bombings inflicted on London by the Germans. The story brought together moments of Bart’s Jewish upbringing and featured two star crossed lovers, a Jewish woman and a Cockney Man. The story is told through the eyes of Mrs Blitztein, the mother of the Jewish woman. The show has never been presented on Broadway, despite Bart’s popularity with Oliver! as it was thought that the theme was too British orientated. One of the songs was written for Vera Lynn, and her recording is featured in the musical. 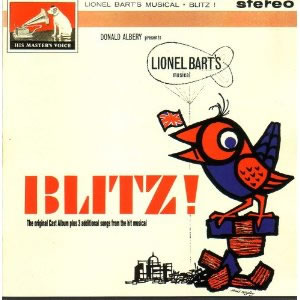 Blitz! is set during the air raids of the Second World War in London. Two families, the Jewish Blitzteins and the Cockney Lockes feud over their neighbouring market stalls, although their children Georgie Locke and Carol Blitztein are in love. The musical opens at Bank underground station as crowds of people shelter from the German Air Raids that have become a daily occurrence. We are introduced to the two families as they welcome their sons Georgie Locke and Harry Blitztein who are home from leave from the war for one week. Georgie catches the eye of Carol and whilst their parents continue to bicker, they begin to get closer and closer. Georgie tells Harry that he is in love with his sister, and Harry advises him against it, saying it is likely to cause trouble. The whole station settles down to listen to Vera Lynn on the wireless.

The news brings reports of more deaths, which include Tommy Blackwell’s parents who refused to go down to the shelter. Tommy is asleep, and Mrs Blitztein decides she will send him and her own son Siddy to the country for safety. The children of the street are lined up the next day to be evacuated, and they leave just in time as the bombing continues to get worse and worse. The area around Petticoat Lane has been destroyed and many families have lost their houses. They have to rally round and take in people to their homes. Mrs Blitztein shares her thoughts on Hitler. She is also upset at her children as Georgie has left a Jewish woman in favour of Carol and Harry has ran off with a married woman. Georgie asks Carol if she will wait for him to return from fighting and they sneak off to spend one final night together. Their parents try to find them but to no avail. The pair are caught outside during an air raid, in which Carol is blinded. Mrs Blitztein catches Harry stealing lead pipes and is disgusted that he won’t go back to the army.

At the station Georgie waits for Carol to come and wave him off. Harry’s former girlfriend tries to buy Harry time as he hasn’t shown up for duty. Mrs Blitztein has looked after Carol throughout the night and tells her son that she can’t see him off. Georgie understands and tells his mother of his intention to marry her when he returns.

Six months later Carol is blindly walking the streets around Petticoat Lane. The market begins to pick up and news of Georgie’s return comes to some of the family. The bombing has died down and the children return to London from the countryside. Carol finds out that Georgie is returning and that he didn’t want her to know and worries that it is because she is blind. Harry continues to be on the run from his duties, having worked on the black market for six months. Mrs Blitztein is in despair at her life and prays to her late husband to send her guidance.

Georgie emerges from the pub where he is drinking is troubles away. He sees himself as a failure as a son, soldier and boyfriend. He meets Harry and tells him he is too nervous to see Carol. Mrs Blitztein finds Georgie and tries to find out what he thinks about Carol. He tells her that he still loves her but is worried that she won’t like him after the war has made him a changed man.

Carol is brought to George and the have a reunion as George tells her that he loves her and proposes. Harry attends the wedding and says he is going back to his duty and the family feud seems somewhat resolved.