Scrooge is a musical adaptation of Charles Dickens’ short story ‘A Christmas Carol’ and is based on the film musical of the same name. The original production opened in 1992 in Birmingham and enjoyed moderate success on UK tours. The show stopped off at the London Palladium in 2005 where aged stage veteran Tommy Steele took on the leading role. The production continued to tour as part of Bill Kenwright theatricals and is set to open at the London Palladium once again for the 2012/13 Christmas season. The musical features all the songs from the film, including the Oscar nominated song ‘Thank You Very Much’, written by Leslie Bricusse. 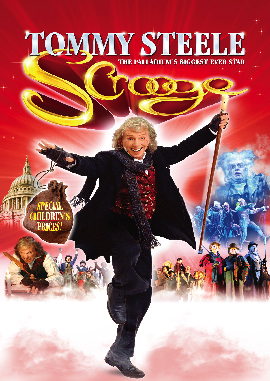 The musical begins on Christmas Eve in Victorian London. Ebenezer Scrooge’s business partner Jacob Marley has just died, leaving him alone in his accountancy firm. Scrooge despises Christmas and refers to it with his catch phrase ‘Bah, Humbug’. He refuses to donate to a charity when they ask for money for the poor and is rude to his nephew who invites him over for Christmas dinner. His clerk Bob Cratchit is overworked and underpaid and Scrooge resents giving him Christmas Day as a holiday.

As Scrooge returns home that evening his is visited by the ghost of Jacob Marley who warns him against being a miser. He shows him chains that he earned in life by being mean hearted, saying he has come to give Scrooge a chance to redeem himself. Marley tells him that he will be visited by three ghosts that evening; the ghost of Christmas Past, Present and Future.

The first ghost to arrive is the Ghost of Christmas Past who is the spirit of a young child. She takes him to scenes from his youth where he is growing up at school. She shows him how he was with other children and his heart begins to melt. This vision helps explore the roots of the miser’s hatred of Christmas, as all the other children leave for the holidays the young Scrooge was intent on working through them and staying alone.

The second spirit is the Ghost of Christmas Present who is a jolly giant. He welcomes Scrooge and shares his passion and love for life. Together they wander the streets of London and see how much joy the season brings to so many people that Scrooge encounters on a daily basis. They visit the house of Scrooge’s nephew who are having a jolly dinner and begin to make a joke out of Scrooge’s negative attitude. Scrooge is hurt to hear how people talk about him, including relatives.

They then visit the house of Bob Cratchit who is enjoying a very modest Christmas dinner with his family. Despite his horrible conditions, Bob refuses to be mean about his employer and is thankful for his job and regular income. The family settle down to enjoy a small goose when Scrooge notices Cratchitt’s son Tiny Tim who is seriously ill but cannot be treated as the family cannot afford to pay for it. Scrooge can’t believe how positive the family are despite their circumstances.

The final spirit is the sinister Ghost of Christmas Yet to Come who doesn’t speak to Scrooge, just shows him visions of the future. Scrooge asks if these are definite views of the future or premonitions of what could happen if he doesn’t change his ways. Scrooge is shown the death of Tiny Tim and finally his own neglected gravestone. Scrooge hears people talking about his death and sees a parade down the street on his coffin with everyone giving thanks for his death. He is shocked to hear how hated he is and begs to return to the present.

Scrooge wakes up in his own room and is a changed man. The evening has taught him that he needs to change his ways. He rushes to the window and yells to a boy on the street, realising he has made it back in time for Christmas Day. He rushes off with joy in his heart and takes gifts to his Nephew and surprises everyone with his new outlook on life. Finally he goes to Bob Cratchit’s house and takes them the biggest Turkey he can find. The show ends with a joyous message of Christmas cheer for all.