The Phantom of the Opera is one of the world’s most successful musicals and the highest grossing entertainment event of all time. Written by Andrew Lloyd Webber, the original London and Broadway productions continue to run at their respective original theatres, where the Broadway production is the longest running show in New York. The London production is second only to Les Miserables, who is a year ahead, opening in 1985. Based on the famous French novel, a mysterious ghost falls in love with a young ballet dancer and trains her up to be an opera star. The haunting story along with impressive stage designs and a soaring score make this one of the biggest shows of all time. 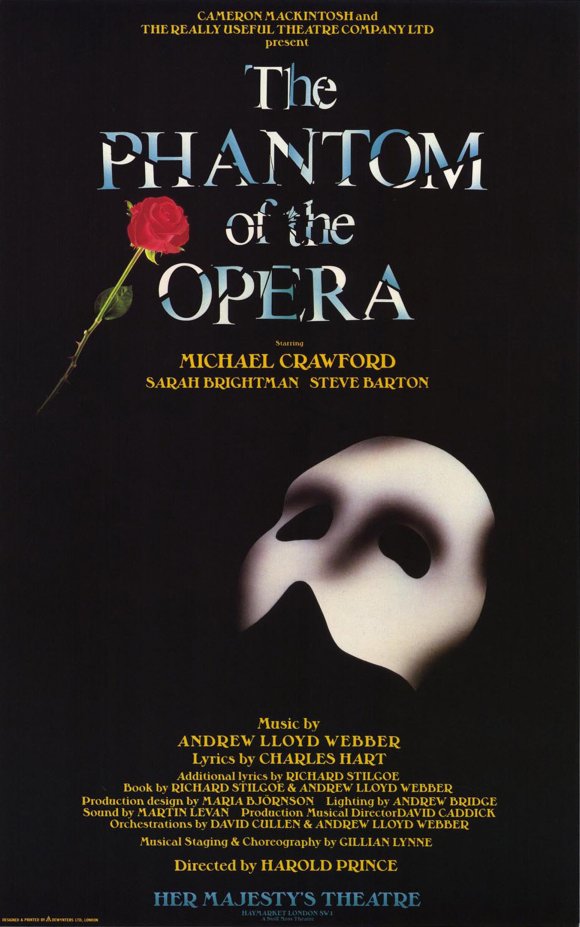 From the novel "Le Fantôme de L'Opéra" by Gaston Leroux;

Cast: Sarah Brightman, Michael Crawford, Steve Barton, Rosemary Ashe all starred in the original London production at the Her Majesty’s Theatre, where the show continues to play into its 27th year, remaining as London’s second longest running musical behind ‘Les Miserables’.

Cast: Sarah Brightman, Michael Crawford starred in the original Broadway cast, reprising their roles from London. The show is currently still running at the Majestic Theatre where it is about to enter its 25th year.

The show begins with a Prologue on the stage of the Paris Opera House in 1905. An auction is underway of theatre props used by the company as an elderly Raoul buys a music box in the shape of a monkey. The final lot is the pieces of the shattered chandelier that featured in the ‘famous disaster’ and as the dust sheet is taken off, the years roll back and the show begins with its famous Overture.

We are taken to 1881 as a dress rehearsal for the Opera House’s production of ‘Hannibal’ is underway. Carlotta, the resident Prima Donna threatens to walk out as a piece of scenery falls from the flies and the ballet girls talk of the phantom that haunts the theatre. At the same time new owners of the venue are introduced as Monsieur Firmin and Andre, and they try to detract attention away from the incident. As Carlotta walks, their only option is to let Christine Daae, a ballet girl, to attempt the role and sing.

Christine brings down the house and is noticed by childhood friend Raoul who instantly falls in love with her. Backstage, Christine’s friend Meg asks her about her vocal training and she confesses to taking lessons from an ‘Angel of Music’ who Christine believes is the spirit of her dead father. Raoul visits Christine and they bond over their past. Alone in her dressing room, Christine is visited by The Phantom who takes her through the mirror into his secret lair beneath the Opera House. He serenades her and she sees a mannequin of herself in a wedding dress and faints, and the Phantom puts her to rest. As she wakes up she hears him composing music and removes the mask, seeing his distorted face. He is angry at her curiosity and takes her back to the Opera House.

Onstage the stage hand Joseph Buquet is scaring the chorus girls with tales of the mysterious Phantom. Madame Giry, the ballet mistress reprimands him and tells him not to speak about what he knows. Andre and Firmin have receieved a series of notes from the Phantom telling them how to run his theatre, mainly saying that Carlotta must be taught to act and given the silent role in the next production. Carlotta is furious and as Christine returns she threatens to walk, instigating the managers to shower her with praise to win her back.

Every ignores the Phantom’s instructions and Carlotta is given a leading role over Christine. During the production she looses her voice and the dead corpse of Joseph Buquet falls from the flies. The opera is thrown into disarray and Raoul drags Christine to the roof where they confirm their love for one another. The Phantom overlooks their plans to escape and vows revenge, sending the venue’s impressive chandelier falling from the sky to crash onto the stage.

The second act opens six months later with a masquerade ball. The Phantom appears towards the end with his new opera in which he instructs Christine must play the lead. Raoul is furious and demands information from Madame Giry. The company begin to rehearse the opera as Raoul and the managers plan to trap the Phantom once and for all. Christine is led to the gravestone of her father where the Phantom appears and challenges Raoul once again.

Onstage the opera is underway and the police station themselves ready to capture the ghost. The Phantom takes over one of the roles in the show, and ends up singing with Christine before taking her down once more to his lair, escaping the trap. The Phantom forces Christine into a wedding dress and as Raoul arrives to save her he traps him with his magical lasso. He tells Christine that Raoul will only live if she agrees to live with him forever. Christine is shocked and tells him that is his personality that is ugly rather than his face, and as she kisses him the Phantom experiences compassion and kindness, setting them both free. As the police storm the lair the Phantom escapes under his cape, leaving only his mask behind him.