The great British musical Oliver! has entertained the world for over 50 years and become one of the West End’s most loved shows, thanks to numerous revivals with first rate performers. The show is also performed by various school and youth groups all over the country each year. Written by Lionel Bart the show is based on the novel by Charles Dickens and follows the plucky Oliver Twist in his plight around Victorian London. 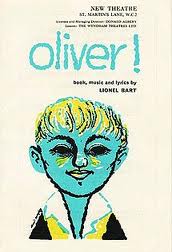 Cast: Rowan Aitkinson, Jodie Prenger (winner of BBC’s I’d Do Anything – search for the stars of Oliver!)

Greedy orphan runs away and becomes a pickpocket under watchful eye of criminal mastermind. Buxom girlfriend’s defense leads to murder.

The show opens in a workhouse, where boys line up to be fed their daily portion of gruel, wishing for something more, “Food, Glorious Food”. As Mr Bumble and Widow Corney teach the boys to be thankful to God, young Oliver Twist is dared to ask for more food. Bumble is shocked by the request (“Oliver”) and decides that the boy is trouble and needs to leave the workhouse, selling him to an undertaker, “Boy For Sale”, not before suggesting his amorous advances to Widow Corney, “I Shall Scream”. At the undertakers parlour he is warned against behaving badly as Mr Sowerberry tells him “That’s Your Funeral”. Alone, Oliver wishes for a happier life and sings “Where is Love?”. He decides to run away to London, and dashes off in the middle of the night.

As he arrives in bustling Victorian London he is greeted by the Artful Dodger, a boy his age who earns a living by pick pocketing on the streets. Dodger introduces him to his way of life and says ‘Consider Yourself’ one of the gang. He leads him back to see Fagin, the crook who runs the thieves kitchen. In Fagin’s den, Oliver is surprised at the number of boys working for him. They teach him that “You’ve Got to Pick a Pocket or Two” in order to survive. Whilst Fagin looks after the boys, they are all under the watchful eye of sinister robber Bill Skyes, whose girlfriend Nancy is sympathetic to the gang. Nancy tells Oliver that “It’s a Fine Life” if he is happy to have nothing. The boys are playful towards Nancy and her friend Bet, telling them that “I’d Do Anything”. Fagin has enough of their games and send them out to the streets to pick pocket, getting them to bring back whatever they can find, but “Be Back Soon”. Whilst on the rob Oliver gets into trouble when he makes a failed attempt at trying to take Mr Brownlow’s wallet. He tries to escape but is captured by the police.

Act II opens at the Three Cripples Arms where Nancy works as a barmaid. She sings an old drinking song “Oom pa Pa” to entertain the guests. Bill Sykes arrives and reminds everyone why they should fear “My Name”. He is furious to hear that Oliver has been captured and concocts a plan with Fagin and Dodger to get him back. Alone, Nancy admits that she will do anything for Bill, despite his violent nature “As Long As He Needs Me”.

Over at Mr Brownlow’s house in Bloomsbury, Oliver is being cared for by the Doctor and Housemaid who sings “Where is Love? (reprise)” to him. They discuss his condition and send him out to run an errand. Oliver is taken in by the beauty of Bloomsbury that opens out in front of him, “Who Will Buy?” As the crowds disperse, Nancy appears to try and get Oliver back and they kidnap him, taking him back to the thieves kitchen. Nancy argues with Bill about the plan (“It’s a Fine Life Reprise”) and he beats her. Fagin questions his future and whether or not he should continue life as a thief, (“Reviewing the Situation”).

Over at the workhouse, Mr Bumble and the now married Mrs Bumble discover a locket that belonged to Oliver’s mother Agnes. They realise that he may have wealthy connections, and journey to find the boy (“Oliver (reprise)”. Mr Brownlow throws the pair out, but recognises the picture in the locket to be his daughter, meaning that Oliver is in fact his grandson. He swears to find the boy and look after him for good. Nancy visits Mr Brownlow and tells him she will bring Oliver to him that night on London Bridge. She knows she is going against Bill’s wishes, but wants to help the boy have a better life, (“As Long As He Needs Me Reprise”). Bill catches wind of the plan and rushes to London Bridge to meet Nancy and Oliver. He intercepts the meeting and beats Nancy to death as she struggles. A chase ensues across London until the police track Bill down and shoot him. Oliver is reunited with his grandfather and they both mourn the death of Nancy. Fagin and Dodger decide it is time to move on with their life of crime (“Reviewing the Situation Reprise”) as the curtain falls.