Oklahoma! is perhaps one of the most important pieces of musical theatre of the Twentieth Century. The iconic Rodgers and Hammerstein score inspired a new generation of Broadway musicals, and pushed the boundaries of the genre. With impressive choreography by Agnes de Mille, featuring one of the first dream ballet sequences seen on the stage, this show changed the way modern audiences would appreciate musicals for the next fifty years. Originally opening in 1943 on Broadway, the show ran for an impressive 5 years and was immortalised by a Hollywood film version. The state of Oklahoma took the title song to be the official anthem of the state, solidifying the show’s cultural impact. 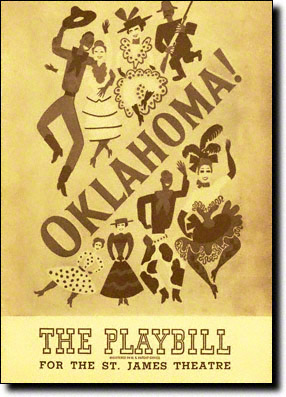 the play Green Grow the Lilacs by Lynn Riggs

Cast: John Diedrich as Curly and Alfred Molina as Jud

As the sun rises over the rolling fields of Oklahoma, we hear the voice of Curley McLain singing “Oh, What a Beautiful Morning” as he startles Aunt Eller who is sat on her farm churning butter. Her niece Laurey Williams enters and teases him. She pretends not to like him and refuses his invitation to the box social that coming evening. He tries to woo her by singing about his “Surrey With a Fringe on Top” and she is almost bought until he admits it isn’t real. She storms off before her can tell her that he really has rented one for the party. Jud Fry, the lonely and misanthropic farm hand has become obsessed with Laurey and invites her to the party with him. She accepts only to annoy Curly.

At the train station, Will Parker has returned from a visit to “Kansas City” and tells the crowd of all the amazing things he has seen. He also got $50 – the amount needed to secure the hand of his intended, Ado Annie. Annie confesses to Laurey that whilst Will was away she fell for a travelling Peddler, Ali Hakim. Laurey tells her she needs to choose who she wants, but she simply “Can’t Say No” to male attention. The girls arrive to assist with the preparations for the party and Laurey tries to hide her feelings towards Curly and his new date Gertie Cummings, (“Many a New Day”).

Ado Annie’s father Carnes is not pleased with Ali Hakim and thretens him with his shotgun. Ali Hakim does not particularly want to get married (“It’s A Scandal, It’s An Outrage”). Curly realises that Laurey is going with Jud to the party and pretends not to be upset, (“People Will Say We’re in Love”). He goes to talk to Jud and convinces him that no one would miss him if he died, (“Poor Jud is Daid”). They talk about Laurey and this makes Jud more determined to keep her in his “Lonely Room”.

Laurey buys some smelling salts from Ali Hakim to help her reveal her true love and she falls asleep, “Out of My Dreams”. A dream ballet scene begins, showing Laurey dancing with Curly. This happiness is interrupted by Jud Fry who fights with Curly and kills him. As the dream turns to a nightmare, Jud wakes her in time to take her to the party.

The box social begins with a barn dance, but division begins as the “Farmer and the Cowman” argue with each other. Aunt Eller tries to control the proceedings as the basket auction begins. Ali Hakim tries to rid himself of Ado Annie and buys Will’s belongings for $50, so he can now marry Annie. When the bidding on Laurey’s box begins Curly and Jud go head to head, with Curly bidding everything he owns for her basket. Will tells Annie that now they are going to be married she has to be faithful and not flirt with others, (“All Er Nuthin”).

Jud confronts Laurey and pressures her into revealing her feelings for him. She tells him she doesn’t like him in that way, and when he gets aggressive she fires him. She cries out for Curley’s help and they admit to each other they are actually in love, (“People Will Say We’re in Love Reprise”). Ali Hakim decides to leave and tells Annie she should marry Will.

Laurey and Curly are finally married and everyone rejoices in the territory becoming a state, (“Oklahoma!). Jud arrives drunk and attacks Curly, and falls on his knife and dies. The guests take him away, declare Curly not guilty and he and Laurey ride off into the sunset in the surrey.