Of Thee I Sing  features music by George Gershwin and lyrics by Ira Gershwin, along with a book by George S Kaufman and Morrie Ryskind. The show was the first ever musical to win the Pulitzer Prize for Drama. The plot follows John P Wintergreen who runs for President of the USA. Whilst his manifesto stands up on the ‘love’ platform, he falls for the wrong woman and finds himself in a difficult political situation. The original production was a critical and commercial success and has led to numerous revivals and concerts over the past 75 years. It was the longest running Gershwin musical of their lifetime. 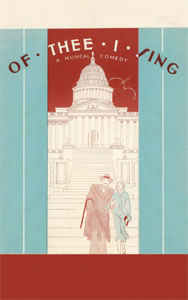 In America during the 1930s, a campaign is underway supporting ‘Wintergreen for President’. John P Wintergreen has been nominated alongside his Vice Presidential candidate Alexander Throttlebottom. As they meet together to discuss party tactics, they ask a room cleaner what issues are important to her. She initially says money, but changes her mind and says that love is the most important thing. The politicians decide that the campaign should run on the principle of love. They decide that Wintergreen needs to find a perfect wife, and set up a nationwide pageant to find the ideal candidate.

John is not particularly happy wit the event and instead falls for Mary, the event organiser. The judges select Diana Devereaux, a southern belle to be his wife, but John refuses and runs off with Mary, whose corn muffins keep the judges at bay.

The theme of love begins to sweep the nation, and as the crowds gather John proposes to Mary and she accepts. He leads the crowds in a rendition of the title number. Wintergreen wins the election by a landslide and holds the wedding on the same day as the inauguration. Just as they are about to tie the knott, Diana appears from the crowd to hold him for breech of contract, saying she was supposed to be marrying him. The Supreme Court rule against her saying Mary’s corn muffins are more important and once again they sing a victorious rendition of the title song.

As John and Mary settle into life in the White House, Throttlebottom realises he has to govern over the senate. Diana is generating support throughout the USA telling anyone who will listen that she has been wronged by the President. Diana is revealed to be a descendant of Napoleon and therefore has French blood. The French ambassador insists that Wintergreen marry Diana to maintain good diplomatic relations between the two countries. Everyone can do nothing but agree, leaving Mary and John to declare their eternal love for each other.

Diana brings the President up in front of the Senate saying she was jilted and a contract was breached. Mary declares she is pregnant and the senators decide they cannot arrest an expectant father. The French Ambassador reveals that because of this event, the birth rate in France has decreased and says that the child should be given over to France as a symbolic gesture.

The baby is born and everyone begins to celebrate. The French Ambassador delivers his final ultimatum as they find out that Mary has actually given birth to twins. Wintergreen has an idea, reminding everyone that the constitution says that if the President is unable to fulfil his duties, then the Vice President has to step up to the mark. He suggests that Throttlebottom then marries Diana instead of him. Everyone is happy and sings a rousing chorus of ‘Of Thee I Sing’.