No, No, Nanette is one of the most popular musicals of the 1920s and enjoyed a fantastic revival in 1971 on Broadway. Featuring music by Vincent Youmans and lyrics by Irving Caesar, the show is based on the 1919 play ‘My Lady Friends’ by Frank Mandel, who also wrote the book of the musical. The plot involves three couples who come together in Atlantic City in the midst of a blackmail scheme and follows typical farce conventions. The show was successful in its original US tour, before opening in London and later on Broadway. Two film versions have been made, and adaptations continue to be created. The 1971 revival was updated by Burt Shevelove who also directed the production. It is now a favourite piece for American school groups and amateur theatre companies. 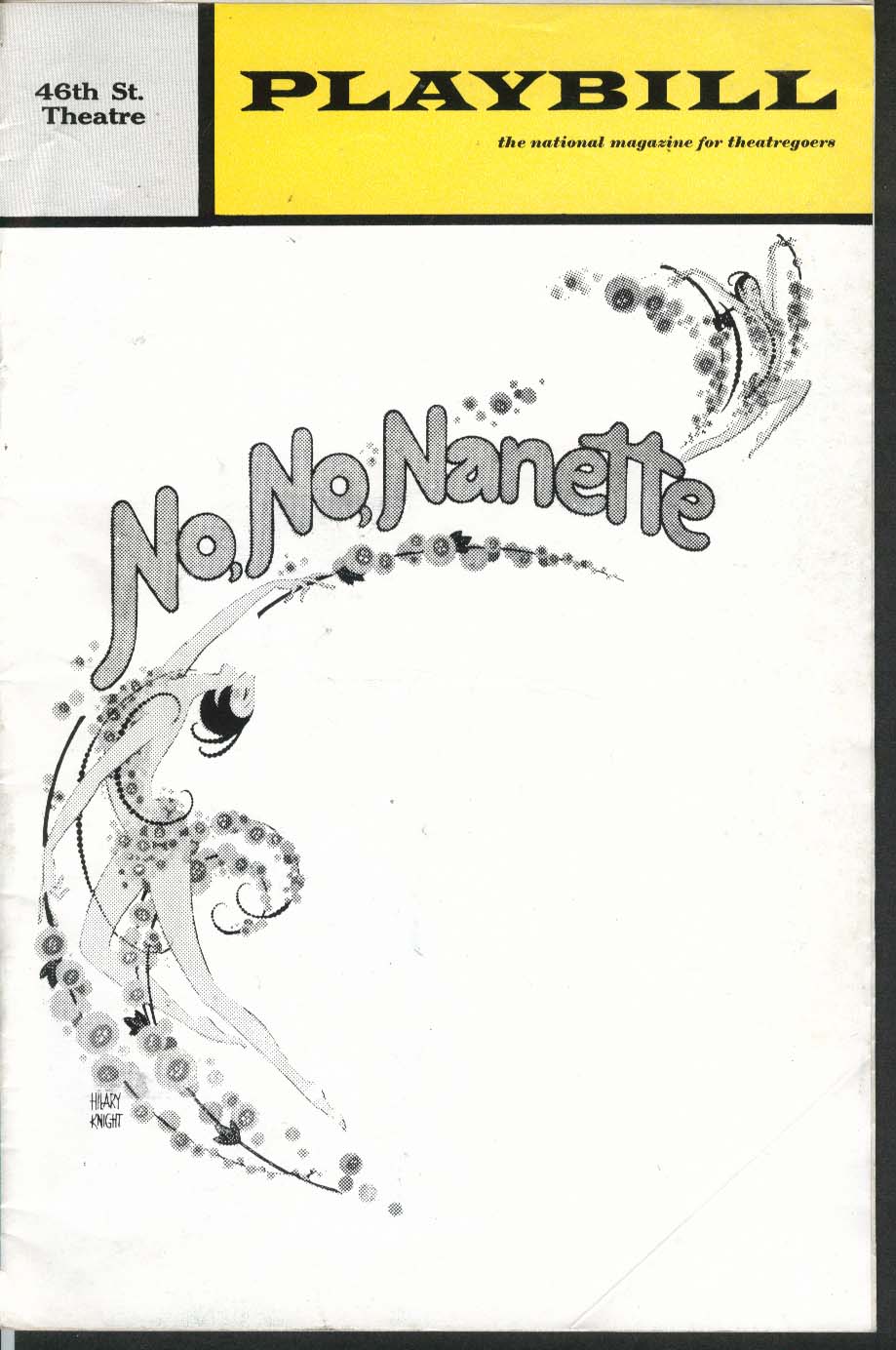 Jimmy Smith is a millionaire Bible publisher who loves giving his money away to philanthropic causes, much to the displeasure of his wife, Sue, who tries to keep a tight reign on the family’s finances. Their friends Lucille and Billy are the opposite, with Lucille spending every penny Billy earns. Jimmy and Sue are raising a feisty young girl named Nanette, who they have tried to bring up in a respectable way. Unbeknownst to Sue, Jimmy is also giving money to three young girls in a naively platonic way.

Nanette is the subject of a lot of male attention, and has attracted a number of suitors. While visiting Sue, Lucille takes the opportunity to tell Nanette that too much flirtation is not a good thing (“Too Many Rings Around Rosie”). Nanette finally falls in love with Billy’s straitlaced nephew, Tom (“I’ve Confessed to the Breeze”), who wants to get married as soon as possible, but Nanette is not ready to settle down just yet.

Jimmy’s three lady friends attempt to blackmail him, and reluctant for Sue to discover he has been wasting money again, he enlists Billy’s help to get rid of them. Billy arranges to bring the girls to the family’s summer home in Atlantic City, but as both men have told their wives they’ll be away on business, Lucille and Sue decide to leave for the cottage as well.

Things are further complicated when Nanette decides to run off to Atlantic City as well, and gets $200 for the trip from Jimmy (“I Want to Be Happy”). Nanette becomes a “Peach on the Beach,” while Jimmy is confronted by the three girls who remind him of his broken promises (“The Three Happies”). Tom also arrives in Atlantic City and finds Nanette, and they imagine a happy life as a married couple (“Tea for Two”). Meanwhile, Lucille runs into Billy, who manages to convince her that nothing amiss is happening, and Lucille assures him he can “Dance With Any Girl at All” as long as he returns to her.

Sue finds Nanette has come to Atlantic City against her wishes and furiously sends her home. She also comes across the three girls talking to Billy and assumes he is having an affair with them. She tells Lucille, who confronts Billy, and in an effort to protect Jimmy, he does not deny it. Meanwhile, Tom has had enough of Nanette’s partying antics and ends their relationship.
Everyone heads back to New York City after the events on the coast. Billy attempts to reconcile with Lucille but is interrupted by the three meddling girls (“Telephone Girlie”). Lucille is devastated by her perception of Billy’s betrayal and sings the “Where-Has-My-Hubby-Gone Blues.”

Finally Tom finds his love for Nanette again and proposes to her; Nanette resolves to leave her single days behind and agrees to get married (“Waiting for You”). Jimmy arrives and unravels the confusion with the three girls, and both couples make up. Sue decides that in order to prevent Jimmy from wasting his money, she should spend it all on herself and buys a fabulous party dress. The entire cast join in the jubilant finale “Take a Little One-Step.”