Li’l Abner is based on the famous Al Capp comic strip and was a popular musical of the 1950s. The show features music by Gene De Paul and lyrics by Johnny Mercer, along with a book by Norman Panama. Many attempts were made to musicalize the comic strip, but the deal was finally won by Paramount Pictures who wanted to turn the stage musical into a film. The show brings the famous characters to life from the comic strip, providing a spoof of hillbillies, whilst at the same time criticising the federal government through its satirical book. The original production was praised for its acting talent onstage, although no formal revival has been made of the show, or London transfer. 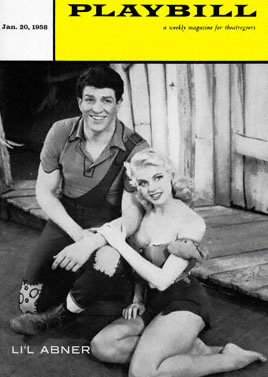 In Dogpatch, U.S.A., it’s “A Typical Day” as bombshell Daisy Mae is trying to convince Li’l Abner Yokum to be her boyfriend. Handsome Abner has no interested in girls or getting a job, so Abner’s mother Mammy tells Daisy Mae to get Abner to come to the Cornpone Meetin’ in the centre of town. Abner is content with his simple life and enjoys fishing with his friends (“If I Had My Druthers”). Daisy Mae arrives to tell the boys about the meeting, and they head into town.

At the Cornpone Meetin’, Senator Fogbound, the town’s congressman, announces that Congress has decided Dogpatch is the most unnecessary town in the country and will therefore become a testing site for a nuclear bomb. The town is thrilled that it has been recognised for any title at all (“Rag Offen the Bush”). However, Earthquake McGoon brings up the fact that if they all leave Dogpatch, they will be unable to have the annual Sadie Hawkins day race. This race is the only way anyone in the town can get married, and a prospective bride must catch a boy during the race in order to be hitched. The town agrees that Sadie Hawkins Day is worth saving the town for, so they plan to prove that Dogpatch has some necessary qualities.

Daisy Mae’s trailer trash family, the Scraggs, decide to accept Earthquake’s $1 to allow him to be caught by Daisy Mae on Sadie Hawkins Day. Meanwhile, Daisy Mae finally manages to make Abner realise that she should be with him (“Namely You”). Reality sets in and the town begins to reject the idea of being an “Unnecessary Town.” Mammy Yokum reveals that it is her Yokumberry Tonic that has given Abner his perfect all-American looks. An unattractive government scientist arrives and upon taking one spoonful he is transformed into a tall beefcake of a man. Abner takes the tonic to Washington to make a case that there is something special about Dogpatch. Greedy General Bullmoose hears of the potion and wants it for himself. He decides to have his voluptuous girlfriend Apasionata Von Climax catch Abner on Sadie Hawkins Day, and then kill Abner once they are married so Appasionata will inherit the formula.

Abner returns home and assures everyone that “The Country’s in the Very Best of Hands.” General Bullmoose, Apasionata, and their cohort Evil Eye Fleagle arrive just in time for Sadie Hawkins Day, as the women begin chasing the men in the annual race. Daisy Mae nearly catches Abner, but when Evil Eye Fleagle freezes everyone in the race, Apasionata manages to catch Abner first.

After the race, 17 year-old Daisy Mae is worried that she failed to win Abner because she is not young and beautiful enough (“I’m Past My Prime”). Mammy Yokum dreams of Bullmoose’s plot to kill Abner and asks Daisy Mae to head to Washington to save him. Daisy Mae requests that Earthquake accompany her and agrees to marry him if he does.

In Washington, Bullmoose realises he will not have to have Abner marry Apassionata and can instead use Fleagle’s evil eye to still Abner’s secret and then convince him to commit suicide. Mammy and Pappy Yokum arrive with Daisy Mae and Earthquake to stop him, and Earthquake inadvertently bounces the beam from Fleagle’s evil eye with a mirror. Mammy is able to get Bullmoose to confess and he and his crew are promptly arrested.

The women of Dogpatch head to the factory in Washington where their husbands have been test subjects for the Yokumberry Tonic. They find them transformed into virile specimens, but unfortunately they no longer have any interest in their wives. The scientists reveal that while the potion makes men handsome, it also removes their romantic desire. The women ask the scientists to “Put ‘Em Back” to the way they were. Daisy Mae confesses to Abner that she has now agreed to marry Earthquake but would prefer to marry him. Pappy Yokum tells Abner that he has a special tonic that will make Abner want to marry Daisy Mae.

When they return to Dogpatch, Daisy Mae and Earthquake proceed with their wedding. Daisy Mae’s relatives arrive and on being informed they will be moving in with the couple, Earthquake begins to have second thoughts. Pappy gives Abner the potion, which is secretly just water, and Abner immediately rushes in to stop the wedding. Earthquake happily allows Abner to marry Daisy Mae instead. The government arrive to evacuate the town before the bomb testing begins, but as they move a statue of the town’s most famous citizen Jubilation T. Cornpone, they discover that as a result of Conrpone’s many military blunders on behalf of the South during the Civil War, Abraham Lincoln has declared Dogpatch a national heritage site. The bomb testing is cancelled and Dogpatch returns to its simple, happy life.