Finding Neverland is the Broadway musical written by Gary Barlow and Eliot Kennedy. Featuring a parade of stars as the Scottish writer J. M. Barrie, including Matthew Morrison and Alfie Boe, Finding Neverland is based on the 2004 film starring Johnny Depp and Kate Winslet. Following the story of J. M. Barrie and his unlikely friendship with Sylvia Llewelyn Davies and her sons, the musical documents the inspiration behind his ever-successful play Peter Pan. When Barrie befriends the boys, he begins to write about their adventures. Being particularly inspired by the youngest Llewelyn Davies boy, Peter, his legendary play slowly begins to take form. 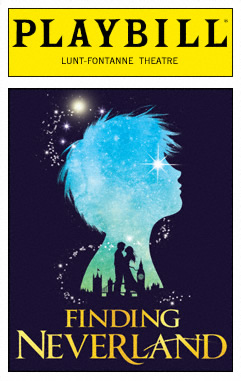 With songs composed by Gary Barlow, Finding Neverland brings the magic of the boy who would never grow up to the stage.

Based on the 2004 film of the same name, Finding Neverland follows famous Scottish writer J. M. Barrie, his friendship with Sylvia Llewelyn Davies and close relationship with her four sons. After a less than successful opening of his latest play Little Mary, Barrie meets widowed Sylvia and her sons in Kensington Gardens and they all soon develop a strong bond.

M. Barrie proves to be a great friend and father figure to the boys, and his antics with the children quickly begin to inspire him to write a play about boys who never wish to grow up, with youngest son Peter provides particular inspiration. Soon, people begin to question his relationship with Sylvia, although it remains fiercely platonic. His wife Mary divorces him and Sylvia’s mother starts to object at the amount of time Barrie spends with the family.

Sylvia becomes increasingly weak after an illness, but Barrie continues to play with the boys, taking the adventures they experience and turning them into Peter Pan. Presenting his idea to Producer Charles Frohman, Frohman reluctantly agrees to put on the play, despite believing that it will not appeal to his upper-class theatregoers. Barrie takes it on himself to disperse children from a local orphanage throughout the audience, which causes the surrounding adults to delight in the play. Proving a huge success, Peter Llewelyn Davies arrives to watch the show and realises that it is about him and his brothers; George, Michael and Jack.

Too ill to attend the theatre, Barrie puts on a production for Sylvia in her home, gathering the actors, props and musicians in her house. At the end, Peter Pan points to the doors to signify that she should go to Neverland. She takes the hand of her boys and walks into Neverland, implying her death. At Sylvia’s funeral, Barrie discovers that her will reads that he should take care of the Llewelyn Davies boys, which he is overjoyed at. Barrie and Peter form a bond unlike any other.