Wonderful Town is one of Leonard Bernstein’s most impressive musical scores. Featuring a book by Joseph A Fields and Jerome Chodorov, the musical is based on the Chodorov’s 1940 play ‘My Sister Eileen’. Betty Comden and Adolph Green provided the lyrics to what became some of Bernstein’s most memorable standards such as ‘Ohio’, ‘Conga’ and ‘A Million Ways to Loose a Man’. The show received its Broadway debut in 1953 and went on to win five Tony Awards including the coveted Best Musical Award. The show transferred to London in 1955, but was more popular when it was revived at the Queen’s Theatre starring Maureen Lipman. 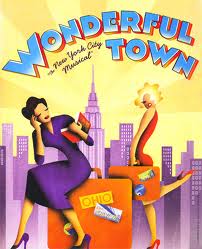 Joseph A. Fields and Jerome Chodorov

the book by Ruth McKenney

Midwestern sisters head to the bright lights of the big apple in search of love and fortune but are greeted by prisons and nightclubs.

The show opens in summer 1935 in New York. A tour guide is taking a group of tourist around the city and introduces them to “Christopher Street” and the people who live there. Ruth and Eileen Sherwood arrive fresh from Ohio with dreams and aspirations of making a big life for themselves in the big city. Ruth is an aspiring writer and Eileen a budding actress. They move into a basement apartment with a lovable landlord Mr Appopolus. They soon become homesick for “Ohio”.

The pair have a go at “Conquering New York” but find disappointment on every corner. Eileen finds herself popular with the men of the city, which Ruth laments her ability to repel men, saying she may as well write a book called “One Hundred Easy Ways To Lose a Man”. Ruth bullies her way into a small office that deals with short story submissions and meets Bob Baker. He is negative towards her telling her “What A Waste” it was for her to come to the city. She leaves a selection of her work with him regardless, hoping that he will enjoy it later.

Eileen is “A Little Bit in Love” with Frank and invites him round to their apartment for dinner. Bob arrives looking for Ruth and he stays for dinner too. Their upstairs neighbour Wreck is an out of season American Football player and has to hide in their apartment as his live in lover’s mother is coming to town.

Eileen takes it upon herself to invite Frank, Bob and Chick Clark (a newspaper scribe) over for a potluck supper to help Ruth in her quest for a job. Both girls find themselves attracted to Bob and they struggle to all fill the awkward silences, (“Conversation Piece”). Bob discusses Ruth’s stories with her and he tells her to write from experience. This ends up with them saying the wrong thing and Ruth runs off in tears, leaving Bob to sing about his need to find “A Quiet Girl”. Ruth is set to cover a news story at the Brooklyn Navy Yard and teaches them to dance the “Conga”. They follow her home and Ruth yells at Bob before Eileen is arrested for causing a riot on Christopher Street.

In prison Eileen is talk of the town, as the Irish police officers are convinced she is one of them and sing “My Darlin Eileen” to her. Ruth visits her telling her that she will bail her out as soon as she can. She gets a new job as a promoter for a local nightclub ‘The Village Vortex’ and learns the rhythm of “Swing”.

Bob bails Eileen out and the sisters discover that their landlord is threatening to evict them due to the scandal caused by the Conga and one of his paintings going missing, that has been stolen by Wreck’s girlfriend Helen. The sisters learn that they are both attracted to Bob and they wish again that they had never left “Ohio”. Eileen’s infamy gets her a job singing at the Village Vortex nightclub, and they get to keep their apartment and have some money coming in. Bob quits his job and realises that “It’s Love” that he feels for Ruth.

Over at the Vortex the mood shifts to “Ballet at the Village Vortex” and Eileen has stage fright , convincing Ruth to sing the “Wrong Note Rag” with her onstage. Chick arrives and tells Ruth that his boss enjoyed her story on the Brazilian sailors and has given her a job with the paper. Bob decides to tell Ruth exactly how he feels as the curtain falls.