West Side Story is one of the most famous musicals in the classical canon and is regularly performed all over the world. Based on Shakespeare’s Romeo and Juliet the musical boasts one of the most memorable scores ever written for the stage, with songs such as ‘Tonight’, ‘Maria’, ‘America’ and ‘I Feel Pretty’ written by Leonard Bernstein with lyrics by Stephen Sondheim. Although the original 1957 production didn’t run for long, the success of the film adaptation helped cement the show into the American culture. Relocating the story to 1950s New York where two rival gangs The Sharks and The Jets battle for turf, star crossed lovers Maria and Tony meet ending in tragic circumstances. Arthur Laurents’ book provides a timeless adaptation, twinned with Jerome Robbins’ phenomenal dance numbers that makes this an incredible show. 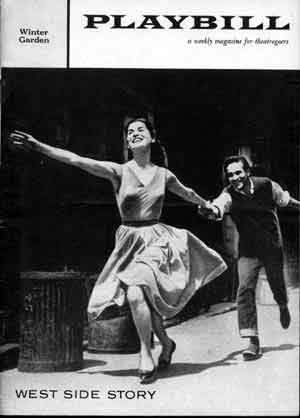 'Romeo and Juliet' by William Shakespeare

A danced Prologue sets up the turf warfare between the Sharks and the Jets in the upper west side of Manhattan. Riff, the leader of the Jets proclaims war, telling Bernardo, leader of the Sharks that they should watch their backs. Officer Krupke and Lieutenant Shrank warn both sides that they don’t want to see any more trouble. Riff attempts to convince Tony to rejoin the Jets, but he has moved on and is now working at Doc’s Drug Store waiting for something that he feels is just around the corner.

Bernardo’s sister Maria is preparing to attend her first dance with the help of Bernardo’s girlfriend Anita. She is excited at the prospect and is full of youthful optimism, and not so keen on her date Chino. At the Dance at the Gym both sides come to blows once more, but Tony and Maria meet across the floor, melting away into their own world. As they escape the gym, Tony sings ‘Maria’ and later goes to find her on her balcony where they fall instantly in love. Meanwhile the Sharks return from the dance and Anita and Rosalia sing of their differing opinions of ‘America’. At Doc’s store, the Jets keep ‘Cool’ and prepare to rumble with the Sharks. Tony visits Maria at the bridal shop where she works, and Anita grows suspicious of their relationship, warning Maria against causing trouble. The pair make a mock wedding ceremony and commit to ‘One Hand, One Heart’. Both gangs prepare to rumble under the highway, and as Riff and Bernardo fight, Riff is stabbed. Tony rushes in to break it up, and seeing his best friend lying dead, launches an attack on Bernardo and kills him.

Maria continues to walk on cloud nine, singing ‘I Feel Pretty’. She is interrupted by Chino, who tells her what has happened at the rumble. As Tony enters she is distraught and the pair wish to be taken to somewhere they can all be free. In a dream ballet sequence we see how they wish their lives to be, away from the fighting and the division. They spend the night together. Anita startles Maria, and Tony escapes just in time. Anita is furious, warning Maria about ‘A Boy Like That’, but Maria protests her love and convinces her that they should be together. Anita promises to help Maria and warns her that Chino has a gun and is looking to kill Tony. She goes to Doc’s drug-store to warn him, but is attacked by the Jet boys who attempt to rape her. She leaves angrily, telling Tony that Maria is already dead. Tony takes to the streets, and is shot by Chino. Maria makes it to him just in time and the pair reconcile. As he passes away Maria blames both sides, saying they were all responsible for his death, as the curtain silently falls.