Street Scene is sometimes referred to an American Opera, along the similar lines to Gershwin’s ‘Porgy and Bess’. The score was created by Kurt Weill, including lyrics by Langston Hughes with book by Elmer Rice. The musical is based on Rice’s earlier play of the same name which went on to win the Pulitzer Prize. The original production enjoyed modest success although it was partly a commercial failure. The show has not been revived on Broadway, although it is a popular choice for Opera companies in both the USA and UK. A successful revival by The Opera Group at the Young Vic in 2008 brought the show to the attention of West End audiences and has gone on to further productions around the world. 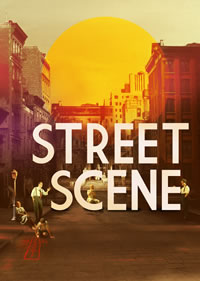 It is a hot summer day in a tenement on Manhattan’s East Side in 1946. The neighbours sit on their porches complaining about the heat before the gossip turns to Mrs. Maurrant, who is suspected to be having an affair with the milkman, Steve Sankey (“Get a Load of That”). Mrs. Maurrant arrives to chat with the neighbours, who quickly hush all talk of the alleged affair. Young Sam Kaplan comes out of his house and enquires after Mrs. Maurrant’s daughter, Rose, but is told she has not returned form work.

Mrs. Maurrant’s husband, Frank comes home and they fight over the fact that Rose is not back from work (“She Shouldn’t Be Staying Out Nights”). He storms into the house, just as Steve Sankey arrives. The women are very suspicious, particularly when Mrs. Maurrant follows him when he leaves. Mrs. Olsen arrives to claim she has just seen them standing together nearby. Mrs. Maurrant returns and Frank asks her where she’s been, and she says she’s been looking for their son, Willie. Frank gets into a fight with his neighbour Mr. Kaplan over their parenting styles, and Frank wishes people would “Let Things Be Like They Always Was.”

Sam arrives with Willie, who has been in a fight with a local youth. Sam stepped in to prevent Willie from being hurt, and Mrs. Maurrant takes Willie upstairs while Frank heads to a local bar, threatening that there will be trouble if Rose isn’t home when he gets back. With the family gone, the neighbours return to gossiping about the Maurrants, and Sam vehemently defends them. Most of the neighbours then retire for the evening, and Sam returns to his “Lonely House.” Rose arrives with her boss, Harry Easter, who walked her home after work. He makes a pass at her, promising she will be a Broadway star if they ran away together (“Wouldn’t You Like to Be on Broadway?”). She rejects his advances and sends him away when she sees her father coming home. He is furious that she has stayed out dancing and storms into their house.

One of the teenaged neighbours, Vincent, begins catcalling and harassing Rose, prompting Sam to rush to her defence. Vincent manages to knock Sam out, but retreats when he hears his mother calling him. Sam is embarrassed, but Rose is impressed. They share a kiss before Rose heads to bed.

The next morning, the children are playing outside before getting into a fight. Rose calls from her window for them to stop, and Sam comes outside to break it up. Rose tells Sam she has to head to the funeral of the head of her real estate firm. Mrs. Maurrant and Rose confront Frank about his behaviour and he flies into a rage. When Mrs. Maurrant asks how long he’ll be away on his next business trip, Frank accuses her of having an affair, which she denies. As he storms off, Rose and Mrs. Maurrant worry that “There’ll Be Trouble.”

Rose tells Sam about Harry’s offer of running away together, and he gets upset before suggesting that the he and Rose should be running off together instead. Rose agrees, and they plan to escape their humdrum lives (“We’ll Go Away Together”). She heads off to the funeral, and Sam watches as Steve arrives and heads up to the Maurrant house. Mrs. Maurrant pulls the shades down, just as Frank arrives having reconsidered his business trip. Sam pleads with Frank not to enter the house, but he pushes his way in. A scream is heard before two gunshots ring out. Steve appears in the window before being shot by Frank.

The neighbours congregate to see what the commotion is and Frank appears covered in blood brandishing a pistol as he makes his escape. The police arrive as does Rose, returning from the funeral. Sam tries to prevent her from seeing the tragic scene, but she too pushes her way in. She asks the police if her father has been found, but he has not. Sam has sent Willie to stay with an aunt.

The police finally find Frank in a nearby basement. He asks to speak to his daughter before being taken away, and they agree. Frank and a devastated Rose share a moment (“He Loved Her Too”) before he is arrested. Rose informs Sam that she is going away, and he pleads with her to stay as he loves her. She replies that her parents have proved to her that love does not exist and that she must go alone. The neighbours congregate and gossip about Rose being seen with Harry last night before conversation returns to the sweltering heat.