Spiderman: Turn Off the Dark is the controversial Broadway musical that holds the record for the most expensive musical production in history. Since its initial creation, controversy surrounded the production, with a preview period of 182 performances before the official press night. The show was regularly in the news before the official opening due to the size and scale of the aerial stunts, in which many cast members were injured throughout the initial performances. Originally directed by Julie Taymor, she was later let go from the production and sued the company for damaged in a long, ongoing legal battle. The musical features music by Bono and The Edge. 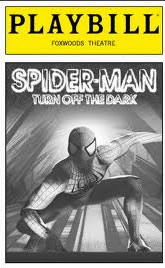 Bono and The Edge

Bono and The Edge

A boy falls from the sky in this superhero adventure as Spiderman takes on the Green Goblin in order to protect his city and get the girl.

At a Midtown Manhatten High School Peter Parker is giving a book report about Arachne, the Goddess of the Weavers. During the report Arachne tumbles onto the stage and takes over telling her own story. She tells how she once was a skilled weaver and battled with Athene. She was then turned into the world’s first spider and forced to wander the universe spinning webs. Peter is bullied at school by a gang of kids that includes his ex-best friend Flash Thompson. Peter has a crush on Mary Jane who lives next-door and they bond over having mutually unhappy lives. Mary lives with an abusive father and Peter lives with his aunt and uncle after his parents dies in a plane crash.

The school go on a trip to a genetics lab, which is thrown into disarray when a genetically modified spider escapes and bites Peter. He begins to develop spider-like powers and muscular physique, discovering he can emit webs from his wrists. He utilises these powers to defeat the school bullies and impress Mary Jane by winning a wrestling tournament. His Uncle is shot by a carjacker and he is distraught at his recent selfishness. Guided by his Aunt and Arachne, he decides to use his gift to fight evil in the world. He vows to avenge his Uncle.

Peter makes his iconic costume and becomes Spider-Man, fighting criminals and saving people’s lives. ‘The Daily Bugle’ begins to report on his antics, and Peter is hired by them as a photographer. He then shares a romantic encounter with Mary Jane. Meanwhile Norman Osborn is jealous of Spider-Man, thinking that his research has been stolen. He rushes his research causing a power surge, which mutates him into the Green Goblin.
The Green Goblin then uses his research to mutate other humans and creates a company of villains from his former employees. They go on a rampage through New York and come into battle with Spider-Man who defeats them, but the Green Goblin escapes. The Goblin visits the Daily Bugle and convinces them to print bad news about Spider-Man which affects his reputation. Peter sees Arachne in a vision who reminds him that being a hero is his destiny.

Mary suggests that her and Peter take a break, as Spider-Man commitments begin to get in the way of their relationship. Peter decides to give up being Spider-Man and gives his costume away and proposes to her. The Green Goblin sends a message to say that he will target Spider-Man’s loved ones, which forces Peter to break up with Mary to protect her. He realises that he needs to be a hero for the whole world, not just for Mary. He finds his costume again and rushes off to take on the Green Goblin.

At the top of the Chrysler Building the Goblin threatens Mary-Jane, which results in a huge battle over the audience. Spider-Man ties the Goblin to a piano which falls from the sky, sending him to his death. Mary Jane has now guessed Spider-Man’s identity and the pair contemplate their life together.

Winner of no major awards