South Pacific is a Rodgers and Hammerstein musical from 1949. The book was written by Joshua Logan, adapted from James Michener’s novel Tales of the South Pacific and is set in a US Naval base during the final part of World War II in the South Pacific islands. The musical is well known for its score of show standards, ranging from the powerful ‘Some Enchanted Evening’ to the whimsical ‘Wash That Man Right Outta My Hair’. The show has been revived on both Broadway and the West End, with successful recent productions touring both the US and UK. 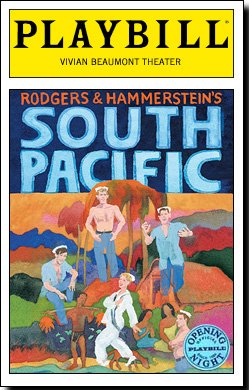 During World War II, an American Navy nurse named Nellie Forbush arrives on an island in the South Pacific, where she quickly falls in love with Emile de Becque, a dashing French plantation owner. While everyone else is concerned with the war around them, Nellie assures Emile that as a “Cockeyed Optimist,” she knows everything will turn out well in the end. They express their love for each other (“Some Enchanted Evening”) before she heads back to the hospital.

The navy men are growing restless, as the women on the island are all commissioned nurses and thus off limits to them. The only female civilian is “Bloody Mary,” a flirtatious middle-aged Tonkinese woman who sells grass skirts and other novelties. Luther Billis and the other men hope she will one day take them to the legendary island Bali Ha’i, which is allegedly full of women, as they all agree “There is Nothing Like a Dame.”

Marine Lieutenant Joseph Cable arrives on the island to carry out a military mission. Bloody Mary convinces him that “Bali Ha’i” will be important to him, and he agrees to go along with Billis and some other friends. He has heard of Emile and feels his knowledge of the area would be useful on their next mission and asks Nellie to find out more about his character, as he has heard unsavoury rumours about him, including that he killed a man in France.

Nellie is furious at the allegations and decides she is done with Emile (“I’m Gonna Wash That Man Right Outa My Hair”). However, he soon arrives and manages to persuade her to join him for a party where he will introduce her to his friends. At the party, he reveals that he killed a man in self-defence and a relieved Nellie accepts his marriage proposal (“I’m in Love With a Wonderful Guy”).

Cable asks Emile to join his mission, but Emile is eager to start his new life with Nellie and refuses. Cable and Billis head to the island of Bali Ha’i, where Bloody Mary introduces Cable to her daughter Liat, knowing that her only chance of a better life is marrying an American soldier. Cable and Liat instantly fall in love (“Younger Than Springtime”). Meanwhile, Emile introduces Nellie to Jerome and Ngana, who he reveals are his children with a Tonkinese woman who has since died. Nellie likes the children but cannot bring herself to be mother to children who are not white and leaves Emile dumbfounded.

Bloody Mary encourages Cable and Liat’s blossoming romance (“Happy Talk”), and advises they get marries. Cable reveals he could never marry a woman who is not white because of his family’s prejudice, and Bloody Mary furiously tears her away. Later, Emile confronts Cable about his and Nellie’s racist views, and Cable explains that this is the way American society has raised them (“You’ve Got to Be Carefully Taught”).

Emile laments losing Nellie and wonders what might have been (“This Could Have Been Mine”). He decides to join Cable on the dangerous mission, as he has nothing to lose. Though the mission is successful, Cable is killed and Emile is now missing. When Nellie finds out the news, she is forced to tell Liat her love is dead. The rest of the soldiers head off to battle, but Nellie decides to stay behind and look after Emile’s children, soon growing to love them. As they sing “Dites-Moi” together, they hear Emile’s voice join them, and Nellie assures him she has given up her prejudice and wants to be with him for good.