Based on the smash-hit cult classic film School of Rock starring Jack Black, Andrew Lloyd Webber and Julian Fellowes adapted the story of wannabe rock star Dewey Finn into a rock ‘n’ roll musical. Originally opening at the Winter Garden Theatre on Broadway in 2015, starring Alex Brightman and Sierra Boggess, School of Rock – The Musical follows the story of Dewey as he becomes a substitute teacher at a prestigious school. Earning praise from audiences and critics alike, the musical went on to be nominated for an impressive four Tony Awards, including Best Musical, as well as five Drama Desk Awards, including Outstanding Musical. 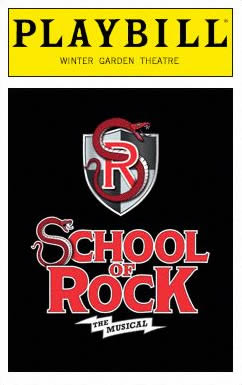 Cast: Not yet announced.

Based on the hit 2003 film starring Jack Black, School of Rock is the hilarious new musical that follows failed wannabe rock-star Dewey Finn as he poses as a substitute teacher. When Dewey’s band “No Vacancy” decide that they want to get rid of him as their lead singer, his dreams of becoming a famous frontman are shattered. Resorting to endless days sleeping in at his apartment, which he lives in thanks to substitute teacher and best friend Ned Schneebly and his uptight girlfriend Patty, Dewey becomes a complete slob.

After endless nagging from a vicious Patty, who encourages him to give up his dreams and get a normal job otherwise he will be thrown out, Dewey decides that it may be time to take action. When private school Horace Green phones the apartment asking for Ned and offering a whacking $950 sum a week, Dewey can’t resist taking up the offer for himself – posing as Ned! Out of place in a school of straight ties, straight-laces and straight faces, Dewey soon finds out that there may be more to this teaching malarkey than he thought.

Meeting the beautiful, yet extremely uptight headmistress Rosalie Mullins, Dewey becomes aware that he has his work cut out for him. At first, he takes zero interest in the snotty children around him, but when he overhears the potential talent coming from the music room, he hatches a cunning plan. With the upcoming Battle of the Bands, Dewey begins to teach the children a lesson they will never forget and gives them a complete education in the power of rock music.

Soon, the children begin to have more fun than they’ve ever had at Horace Green, learning new talents and finally working together. Rosalie begins to relax a bit more in the company of Dewey, and when the two take a trip to a grotty pub, she reveals that she has always had a love for rock music. Taking his opportune moment, Dewey asks if he can take the children to a concert, secretly covering his alternative motives to take them to compete in Battle of the Bands against “No Vacancy”.

Unfortunately, Patty cottons on to Dewey’s mysterious employment and calls the police on him at a parent’s evening. When it is revealed to the parents, kids and Rosalie that Dewey is not in fact Ned, he is forced to leave the school just before the epic Battle of the Bands concert. Luckily, the kids want to rock ‘n’ roll just as much as Dewey does, and sneak to his apartment to take him to the concert!