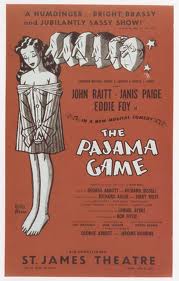 the novel 7 1/2 cents by Richard Bissell

At the Sleep-Tite Pajama Factory the workers are pushed to their limits, making pajamas at lightning speed, (“Racing With The Clock”). They are so angry with their conditions that they are considering striking. Sid Sorokin, the new superintendent visits the factory and ruffles a few feathers, especially with the ladies, (“A New Town is a Blue Town”). The union encourages the workers to demand a pay rise of seven and a half cents per hour, although they are not sure how to get it. Sid meets Babe, and despite being on opposite sides of the dispute they are clearly in love. Babe’s work colleagues tease her about her feelings, but she brushes them aside saying “I Am Not At All in Love”.

In similar romantic news, the office efficiency expert Hines is in love with Gladys, the President’s Secretary but she has had enough of his jealous behaviour. The pair have a fight and Mabel, Sid’s secretary helps Hines stop his jealous ways, (“I’ll Never Be Jealous Again”). Babe continues to play with Sid, and he has to read his feelings into his Dictaphone, (“Hey There”).

The company hosts their annual picnic, where head of the Union Prez attempts to woo Gladys who does not appreciate his attentions, (“Her Is”). For entertainment, Hines demonstrates his knife throwing act as Babe continues to warm up to Sid during their “Once a Year Day”. Prez then turns to the easier target of Mae who responds aggressively. Sid and Babe continue to flirt and make “Small Talk” before they eventually let their feelings for one another come to the surface, (“There Once Was a Man”).

The factory try to strike by slowing down their work and Sid tells them that he will fire anyone who deliberately slacks off. Babe continues to head the strike campaign, and kicks the machinery, causing it to break. Sid is forced to fire Babe and as she leaves he questions their romance and if it can possibly work.

During a meeting with the union, Gladys performs a number for the boys in the factory, (“Steam Heat”). The group meet at Babe’s house and encourages the workers to sabotage the pajamas in order to make their point. Sid arrives at her house and attempts to make up with Babe but she forces him away.

Hines becomes affected by the factory slow down (“Think of the Time I Save”) and Sid begins to see things from the worker’s point of view. He takes Gladys out to a night club called “Hernando’s Hideaway” in order to get the company key from her without her knowing. Despite acting on behalf of Babe and the workers, Babe and Hines see the pair together and assume they are now romantically involved. Babe runs off, and Hines sees that his jealous thoughts were founded after all.

Sid uses the key to sneak into the firms office and see the books. He discovers that the boss Hasler has been keeping the extra profits despite putting the seven and a half cents onto the production costs. Sid rushes to bring the news to the union rally, and he saves the day by proving the strike action is justified. The factory are all happy and Sid and Babe go off together, (“The Pajama Game”).