The Music Man tells the charming story of con man Harold Hill and his 76 Trombones has been parodied by various forms of media over the past half a century. Meredith Wilson’s 1957 musical was one of the biggest Broadway hits that year, winning the Tony Award for Best Musical. In small town America, con artist ‘Professor’ Hill convinces the town of Rock Island that he can create a boy’s band, getting them to part with their money. He falls for the stubborn librarian Marian Paroo and attempts to charm her and her whole family. The show starred Robert Preston in the lead role alongside Barbara Cook who brought the memorable score to life, which included the songs ‘Till There Was You’, ‘Iowa Stubborn’, ‘Seventy Six Trombones’ and ‘Shipoopi’. The show was last revived on Broadway in 2000 by director and choreographer Susan Stroman. 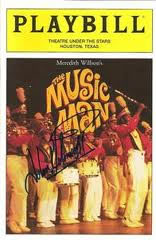 During the summer of 1912, a group of travelling salesmen travel aboard a train leaving Rock Island Illinois. They have an argument about selling goods (“Rock Island”) and begin to talk about a con-man known as Harold Hill who has been travelling around towns and scamming communities. The train arrives in Iowa, and we see a gentleman leave the train and read from his suitcase that his is Professor Harold Hill.

The townsfolk of River City Iowa sing about their stubborn nature (Iowa Stubborn) and Hill finds an old friend Marcellus who lives in the town. He knows about Hill’s trick where he convinces the town to invest in a musical band, and takes their money for instruments and uniforms, before leaving them and taking the money with him. Hill notices the town gathering at the new local billiard parlour and uses it to tell the town that the pool table will only cause trouble (“Ya Got Trouble”) and whips them into a frenzy. Marcellus points out Marian Paroo, the librarian and musician who gives piano lessons. Her lisping brother Winthrop lives with her and doesn’t speak. Marian returns home and her mother Mrs Paroo questions her about the new man in town (“Piano Lesson/If You Don’t Mind Me Saying So”). Her piano pupil Amaryllis asks her who she can wish goodnight on the evening star, and Marian wishes “Goodnight, My Someone”, longing to find a sweetheart.

On Independence Day, Hill uses the celebration to show the crowd what trouble the billiard table can cause, as a local lout Tommy sets off a firecracker. He reminds them they have trouble in their midst and the only way to change this is with a band, (“Ya Got Trouble Reprise/Seventy Six Trombones”). The town are set on the idea of a band, and Mayor Shinn tells the school board to get Hill’s qualifications. As they ask, he turns them into a Barbershop Quartet and they are distracted (“Ice Cream/Sincere”). The mayor’s daughter Zaneeta is set up with Tommy whilst Harold tells Marcellus that he is hoping to woo Marian, (“The Sadder But Wiser Girl For Me”). The women of the town are gossiping (“Pick-a-Little, Talk-a-Little”) and warn Harold that Marian is vulgar as she advocates dirty books in her library. He charms them (“Goodnight Ladies”) and heads to the Library to charm Marian, who ignores he adances (“Marian the Librarian”). She dances with him and slaps him when he tries to kiss her, missing and hitting Tommy instead. Harold signs up Winthrop to the band, and Mrs Paroo asks her daughter why she is so mean to Harold. She explains she is looking for “My White Knight” before the town go into overdrive as “The Wells Fargo Wagon” arrives with the band instruments. Marian has researched Hill’s old college, and goes to present her findings to Mayor Shin, but as she sees how happy the new cornet has made her brother, she tears that page out.

The second act opens with the ladies rehearsing for the dance in the school gym, (“It’s You”) and Marcellus interrupts with a dance number (“Shipoopi”). As Hill is under pressure to bring the school band together, he explains his ‘think system’ where instead of knowing the notes, you just think them. The school board attempt to get his credentials once again but he slips away “Lida Rose”. Marian is warming to Harold, “Will I Ever Tell You?” and Winthrop returns from rehearsal to tell his sister and mother about Hill’s home town “Garry, Indiana”. Charlie, a salesman arrives and warns Marian about Harold and tells her he has a girl in every county in Illinois. She decides to confront him and they meet at the footbridge where she tells him what a difference he has made in their lives, (“Till There Was You”). Marcellus tells Harold that the band uniforms have arrived and his time to run off with the money is now. Harold tells him he is going to stay, and as he hears Marian singing he realises he is in love with him.

Charlie arrives at the Ice Cream Social and tells the town that Harold is a fraud. The town, and Marian are furious and they begin to search for him. He is arrested as he tells Marian that he loves her. At the high school gym Mayor Shinn is crying for the band. The boys march in and play using their ‘think system’ and as the parents are so proud, Harold runs into Marian’s arms.