Matilda the Musical is the Olivier and Tony Award-winning musical that began its life in Stratford-Upon-Avon as part of the Royal Shakespeare Company’s season. With award-winning music and lyrics by comedienne Tim Minchin and an award-winning book by Dennis Kelly, Matilda is one of the West End’s most successful musicals. With an abundance of now memorable songs including “Naughty”, “Quiet” and “Revolting Children”, the musical has since proved a smash-hit in Australia, winning a record-breaking number of awards. Based on Roald Dahl’s children’s book of the same name, Matilda the Musical follows five year-old Matilda, who discovers that she can do very strange things with her mind! 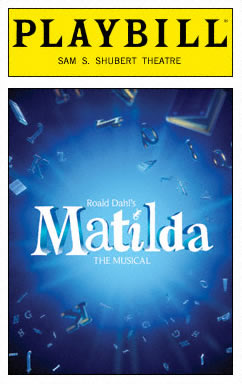 Matilda the Musical opens at a children’s party, with the children and their parents obsessing over the miracles that they possess. Meanwhile, Mrs Wormwood is rushed to hospital before she jets off to Spain to compete in ballroom dancing. Thinking she is fat, she asks the doctor what is wrong and he tells her that she is about to have a baby. Giving birth, both Mrs Wormwood and Mr Wormwood make it very clear that the child is not wanted, especially because she’s a girl.

Five years later, Matilda is super intelligent, an avid book reader and lives unhappily with her parents and brother. The Wormwoods frequently shout at her and Matilda often questions their morality. When Mr Wormwood attempts to sell some very used cars at a very disproportionate price, she retaliates by adding her mother’s peroxide to her father’s hair gel, leaving Mr Wormwood with luminescent green hair. Matilda regularly attends the library and talks to Mrs Phelps, telling her stories about an Acrobat and Escapologist.

Matilda attends her first day of school, and the older children warn everyone that school is not what it seems. Matilda and her friends meet Miss Honey, who is in awe of Matilda’s intelligence and goes to the headmistress, Miss Trunchbull, to tell her that she thinks Matilda should be in the top class. Upon entering, Miss Trunchbull tells her how much she hates children, dismissing Miss Honey’s request by lecturing her on the importance of rules.

Back at home, Mr Wormwood blames his loss of sale on Matilda and rips up one of her library books, causing her to superglue his hat. At school, Matilda and her friends learn of Miss Trunchbull’s scary punishments, including the chokey. After being accused of pouring treacle on Miss Trunchbull’s chair, Nigel is scared and hides from her. Matilda sticks up for him, telling Miss Trunchbull that Nigel suffers from narcolepsy and has been asleep for an hour, so it can’t have been him. Miss Trunchbull takes her anger out on young Amanda, spinning her by her pigtails and hammer-throwing her across the field.

Miss Honey visits the Wormwood family to inform them that Matilda is very talented. Mrs Wormwood introduces her to her dance partner, Rudolpho, and tells her that she needs to lighten up. Miss Honey realises that the Wormwood’s do not care about their daughter. Meanwhile, Matilda returns to the library to tell Mrs Phelps more about the Acrobat and Escapologist. The Acrobat’s sister is a hammer-throwing champion who hates children and forces the acrobat to perform, even though she is pregnant. Matilda stops the story there. Returning to school, Bruce Bogtrotter has stolen a slice of Miss Trunchbull’s cake and she is out for blood. Punishing him by forcing him to eat the whole cake, the entire student body cheers him on, including Miss Honey. He eats the whole cake, enraging Miss Trunchbull, who drags him away to the chokey.

Act II begins with Mr Wormwood telling the audience of the dangers of reading and Matilda’s friend Lavender letting the audience know that she plans to put a newt in Miss Trunchbull’s water jug. The schoolchildren gather together and dream of what life will be like when they are grown-ups. Matilda returns to the library to tell Mrs Phelps more of her story. The Acrobat performs the trick, despite her pregnancy, and injures herself, staying awake just long enough to give birth to their child. The Escapologist invites the Acrobat’s sister to move in and help him look after his daughter, but she is very cruel to the little girl. Matilda realises that she does not know how the story ends and promises to return to Mrs Phelps with more.

When Mr Wormwood returns from work, pleased to have sold his worn-out cars to Russian dealers, Matilda scolds him for his deceit and he locks her in her bedroom. Matilda continues her story of the Acrobat and Escapologist, revealing that one night the Escapologist returns home to find his daughter weeping at the extent of the abuse. He promises that he will protect her, but the next morning he is gone.

Back at school, Miss Trunchbull subjects the children to a gruelling lesson of physical education, in an attempt to discover who is rebelling against her. When she finds the newt that Lavender placed in the jug, she accuses Eric and begins to punish him. Matilda colds Miss Trunchbull, who begins to shout at her and Matilda soon discovers that she can move objects with her mind, tipping the water jug over and onto Miss Trunchbull. Terrified of the newt, Miss Trunchbull leaves and Miss Honey sends the children home. After Matilda shows Miss Honey her powers, Miss Honey invites her over for tea.

At Miss Honey’s small and humble home, she tells Matilda of her childhood and the abusive aunt who looked after her when her parents died. As she tells the story, she produces a scarf that Matilda recognises from her own tales of the Acrobat and the Escapologist. She realises that her story is in fact true, and is the story of Miss Honey’s childhood, with the wicked aunt being Miss Trunchbull. Soon, she realises that Miss Trunchbull must have killed Magnus, Miss Honey’s father, out of fear of what he might do.

Matilda returns to school, and Miss Trunchbull conducts a spelling test, informing the children that if they misspell a word, they will be sent to the chokey. She issues made-up words to ensure that they will spell them wrong. All the children begin to misspell words, telling her that she can’t take them all to the chokey. Matilda begins to use her powers to write on the blackboard, writing that it is the ghost of Magnus returning and demanding that she gives Miss Honey back her house. Miss Trunchbull runs away, never to be heard of again. A few days later, the will of Miss Honey’s parents is found, leaving all of their money to her. Miss Honey becomes headmistress and asks the Wormwoods if Matilda can live with her.