Dirty Dancing is a musical based on the successful film of the same name. The musical version originally opened in Australia, and then transferred to London’s West End in 2006. The show broke records for having the biggest advances in West End history taking over £6million in advance sales before the show had even opened. The musical played for an impressive 5 years and was extremely popular with hen parties and groups of women. The score featured many songs from the original film plus a few more, and included all the iconic scenes associated with the film. 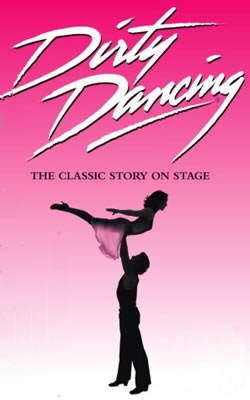 During the summer of 1963 we are welcomed to Kellerman’s holiday resort in the Catskill Mountains of New York. Frances “Baby” Houseman and her affluent Jewish family are spending a summer together, before Baby heads off to college. She is unlike her sister Lisa and feels like an outsider in her family. Her father is the owner of the resort Max Kellerman’s private doctor.

Baby becomes intrigued by the resort’s dance instructor Johnny Castle and sees him giving dance lessons to the holiday makers. He is the opposite of her – a bad boy rebel from a working-class background. He is treated badly by some of the other workers and many of the guests. Johnny invites her to the staff quarters one evening, where dirty dancing is the norm. She dances with Johnny and gets a taste of the rebellious lifestyle.

Baby is forced to go on a date with Max’s grandson Neil whilst her sister Lisa dates Robbie. Johnny’s dance partner Penny finds out she is pregnant by Robbie and Baby confronts him about cheating on her sister and doing nothing to help the pregnant Penny. Baby tries to help by getting the money from her father for an illegal abortion for Penny, whilst having to also stand in for her at a local dance night, where Johnny takes her through many of the steps. He begins to give her dance lessons to prepare for taking Penny’s place.

Their first performance goes well although Baby is scared to do some of the lifts. When they return they find out that Penny’s abortion went wrong and she is in terrible pain. Baby rushes to get her father to help and he then forbids her from having anything to do with Johnny or his friends. They continue their relationship in secret. When a wallet goes missing Johnny is accused of stealing it, and Baby has to come forward as his alibi saying they were together in his hut. He is then cleared of charges, but still fired for having a relationship with a guest. Baby’s father is upset with her behaviour, having specifically forbidden their relationship.

Baby finally overcomes her dancing fears and succeeds in the competition. Johnny returns to perform in the final dance of the season and Baby’s parents are impressed by her dancing and confidence. Her father realises it was Robbie and not Johnny who was responsible for Penny’s pregnancy, as Baby is lifted high into the air by Johnny. The ballroom turns into a nightclub where staff and guests all dance together into the night.