La Cage aux Folles features music and lyrics by Jerry Herman and a book by Harvey Fierstein. The musical is based on a play of the same name by Jean Poiret and focuses on a gay couple who run a nightclub on the classy French Riviera. Albin is a famous drag performer (ZaZa) and the show explores their relationship as their son gets engaged to the daughter of a conservative councillor. The show was extremely popular in in the 1980s on Broadway, although the production wasn’t as successful in London. A London revival by the Menier Chocolate Factory transferred to the West End and then Broadway in 2010. 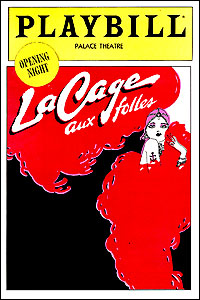 the play by Jean Poiret

Georges and Albin are a committed gay couple who own the nightclub La Cage aux Folles in St. Tropez and live in an apartment above it. Georges serves as master of ceremonies, while Albin appears as the club’s star drag queen, Zaza. Georges has a 24-year-old son named Jean-Michel from a brief fling with a woman during his youth, who he and Albin have raised. Jean-Michel arrives to tell Georges that he is engaged to marry Anne Dindon.

Georges is reluctant to support the marriage, but Jean-Michel convinces him that he is really in love (“With Anne on My Arm”). Jean-Michel then reveals that Anne’s father is the leader of the “Tradition, Family, and Morality” Party that seeks to close all of the country’s drag clubs. He has told Anne’s family that Georges is a former diplomat and arranged for them to visit for dinner. He pleads with Georges to send Albin away and ask him to arrange for his real mother Sybil to replace Albin for the weekend.

Georges reluctantly agrees to the plan and tries to find the right way to tell Albin. He is about to tell him, when Albin says they need to rush back to the club in time for his next show. Georges and Jean-Michel use his absence to clear the apartment of some of Albin’s more flamboyant décor, but Albin catches them in the act and confronts Georges. When the truth comes out, Albin does not fly into a rage but instead calmly takes the stage before singing the torch song “I Am What I Am” as a sign of his refusal to change before storming off.

Georges apologises to Albin the next day, and suggests that rather than leaving he should dress up as Jean-Michel’s straight “Uncle Al.” Though dubious, Albin agrees, and Georges teaches Albin how to be more butch (“Masculinity”). Jean-Michel is not impressed by the disguise and complains about Albin’s flamboyance, but Georges firmly reminds Jean-Michel that Albin has acted as a mother to him (“Look Over There”).

A telegram arrives from Sybil to say she will not be coming, and Albin takes it as an opportunity to dress fully in drag and pretend he is Jean-Michel’s mother. They receive Anne and her parents and head to a café, but their friend who owns the restaurant has not been told about the disguise and asks Albin to perform a song (“The Best of Times”). At the song’s climax, Albin removes his wig, revealing he is a man.

Anne’s parents are mortified and back at the apartment they try to persuade Anne not to marry Jean-Michel, but he refuses. Jean-Michel apologises to Albin for treating him so badly. Anne’s parents prepare to leave, when photographers show up, eager to capture a picture of the morality leader with a famous drag queen. Albin and Georges convince the Dindons to allow Anne to marry Jean-Michel if they help them escape the paparazzi. They agree, and are able to escape through the club below by dressing as drag queens. Finally, Albin and Georges sing of their deep love for each other.