The Wizard of Oz is one of the most popular movie-musicals ever made by MGM. Based on the book by L Frank Baum the show follows young Dorothy Gale and her dog Toto as they are swept away ‘over the rainbow’ to the magical world of Oz. Aided by a talking Scarecrow, Tin Man and Lion, Dorothy battles the Wicked Witch of the West in order to get home, whilst keeping hold of her Ruby Slippers. Numerous productions worldwide have failed to prove as successful as the film, although the RSC version is fondly remembered. In 2010 Andrew Lloyd Webber produced a new version of the show at the London Palladium complete with updated score, book and lyrics by Tim Rice. Companies worldwide continue to present various versions of the show in musical or pantomime format. 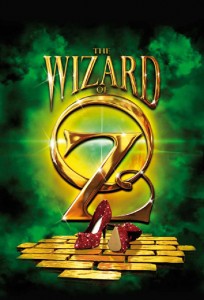 The Wizard of Oz - London Revival

Dorothy Gale lives on a simple farm in Kansas with her Uncle Henry, Aunt Em, and dog, Toto, but dreams of a land somewhere “Over the Rainbow.” When Toto bites their mean neighbour Miss Gulch, Uncle Henry and Aunt Em agree to give the dog away to Miss Gulch. Dorothy is heartbroken, but Toto manages to escape and find his way back to her. Dorothy decides they should run away, and they come across the mysterious Professor Marvel, who manages to convince her that she should return home to her family.

On their way back home, a tornado strikes suddenly. When Dorothy finds she is locked out of the storm cellar, she runs into the house where she bumps her head and is knocked unconscious. The house is lifted high up into the air by the tornado, but remains intact. When she wakes up, Dorothy finds herself in a magical land unlike anything she has seen before.

Glinda the Good Witch arrives, and explains to Dorothy that she has landed in the Land of Oz. Glinda introduces Dorothy to the natives, known as Munchkins, who are thrilled that Dorothy’s house has landed on the Wicked Witch of the East who has held them captive (“Ding-Dong! The Witch is Dead”). As a reward, Glinda bestows the witch’s ruby slippers on Dorothy, but the Wicked Witch of the West arrives and tries to claim the magical shoes. When she is unable to remove them from Dorothy’s feet because of Glinda’s spell, she vows to find a way to retrieve them and disappears.

Glinda encourages Dorothy to visit the wonderful Wizard of Oz, as only he will have the power to send her home. Dorothy and Toto must “Follow the Yellow Brick Road” to the Emerald City to see the Wizard. On the way, she meets a Scarecrow who is missing a brain (“If I Only Had a Brain”), a Tin Man who lacks a heart (“If I Only Had a Heart”), and a Cowardly Lion (“If I Only Had the Nerve”). They join Dorothy to ask the Wizard to grant their own wishes.

The Wicked Witch tries to thwart their journey by creating a field of poison poppies that will make them fall asleep, but Glinda covers the field with snow, ruining the Witch’s spell. The group finally arrives at the Emerald City, where everything is a vibrant shade of green (“The Merry Old Land of Oz”). They are brought to see the Wizard, whose terrifying bellow sends the Cowardly Lion running. He refuses to grant any of their requests until they kill the Wicked Witch of the West.

Dorothy and her friends set off to find the Wicked Witch, and on the way they pass through the Haunted Forest. They are forced to dance themselves into a state of exhaustion by “The Jitterbug,” before the Witch sends her Winged Monkeys to capture Dorothy and Toto. The Witch again tries to remove Dorothy’s shoes, but is unsuccessful. Toto manages to escape and leads the Scarecrow, Tin Man, and Lion to Dorothy, but the Witch has them surrounded. When the Witch lights the Scarecrow on fire, Dorothy throws a bucket of water to put it out and accidentally splashes the Witch who slowly melts until she disappears.

The group returns to the Wizard in the expectation that he will grant their wishes, but find he is once again reluctant. Toto pulls aside a curtain, which reveals that the Wizard is just a normal man. He admits that he is not a Wizard at all, but a magician from Omaha who landed in Oz when his hot-air balloon got loose from a state fair. He agrees to take Dorothy home in his balloon, but when it lifts off too early, Dorothy and Toto are left behind. Glinda returns to reveal that Dorothy had the power to go home all along, and she only needs to click her heels three times. After saying goodbye to her friends, Dorothy clicks her heels and wakes up in her own bed surrounded by her family.