Sweet Charity is a popular musical that has enjoyed successes in both London and New York, as well as the big screen. The show features music by Cy Coleman and lyrics by Dorothy Fields and includes show standards such as ‘Big Spender’, ‘If They Could See Me Now’ and ‘The Rhythm of Life’. Neil Simon’s book is loosly based on Fellini’s screenplay for ‘Nights or Cabiria’ which follows the romantic toils of an optimistic prostitute from a Times Square dance hall. The original production was directed and choreographed by Bob Fosse and starred his wife Gwen Verdon. The show has been revived on Broadway and in the West End numerous times, with many famous actresses taking the central role of Charity Hope Valentine, such as Shirley MacLaine, Christina Applegate and Tamsin Outhwaite. 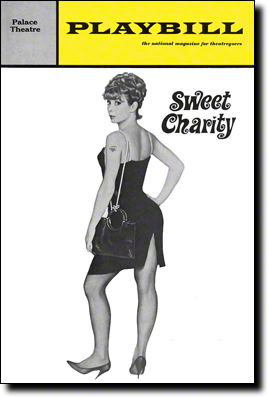 the film Nights Of Cabiria

Charity Valentine is a young woman in New York who works as a taxi dancer at the Fandango Ballroom, meaning gentleman pay her to dance with them by the hour. One evening she meets up with her deadbeat boyfriend Charlie, who she imagines is a lot more complimentary than he is in real life (“You Should See Yourself”). Shockingly, he ends up stealing her purse and pushing her into the lake. She is saved by a passerby and returns empty-handed to the Fandango.

The other girls are unsurprised that Charity has had her heart broken yet again, and encourage her to get more street smarts. They hit the dancefloor, looking for another “Big Spender” to spend a little time with. Charity’s friends Helene and Nickie try to help her through her heartbreak in “Charity’s Soliloquy.”

Leaving work, Charity gives all of her money away to beggars and realises she now won’t be able to eat. Suddenly a film star, Vittorio Vidal chases his girlfriend, Ursula, past Charity. When Ursula refuses to return to him, Vittorio impulsively grabs Charity instead, and she is thrilled with her luck. Vittorio and Charity head to the swanky Pompeii Club, where the clientele are dancing the “Rich Man’s Frug.” Famished after her long day, Charity faints, and encourages Vittorio to bring her to his apartment to rest.

Charity thinks she has all the luck and sings “If My Friends Could See Me Now,” before Ursula arrives to reconcile with Vittorio. Vittorio hides Charity in a closet, where she ends up staying overnight. Vittorio sneaks her out the next morning, and she returns to the Fandango, where she and the girls agree “There’s Gotta Be Something Better Than This.”

In another twist of fate, Charity finds herself stuck in an elevator with a tax accountant named Oscar Lindquist, and she allays his fears with “I’m the Bravest Individual.” They are eventually rescued, and Oscar persuades Charity to visit his hippie church, where they sing “The Rhythm of Life.” When Oscar tries to guess Charity’s profession, he decides she works for a bank and she claims he is correct. Besotted once again, Charity agrees to start dating Oscar, who now calls her “Sweet Charity.”

Charity continues not to reveal her true profession. When she’s cheated out of a client by the new girl she decides to quit Fandango, though she wonders what the future will hold for her (“Where Am I Going?”). She meets up with Oscar and confesses that she is a taxi dancer, to which he confesses that he had followed her one night and already knew. Oscar assures her he doesn’t care what she does for a living and wants to marry her. Charity is thrilled and agrees, singing “I’m a Brass Band.”
Charity returns to the Fandango Ballroom to say goodbye to her friends, who “Love to Cry at Weddings.” Oscar and Charity walk through Central Park, where Oscar suddenly announces that his jealousy of the men she dances for has caused him to decide he cannot go through with the wedding. He pushes her into the lake, just as her previous boyfriend did, but Charity realises at least he didn’t steal her purse and asserts herself with a reprise of “I’m the Bravest Individual.”