Starlight Express is a modern rock musical by British composer Andrew Lloyd Webber, featuring lyrics by Richard Stilgoe. The musical became one of the longest running shows in West End history after playing at the Apollo Victoria for over 7,400 performances. The show follows a young boy’s dream of his toy train set coming to life, and the show follows the story of a group of railway trains including Rusty, Greaseball, Diana and Electric. The score features a wide style of music from rap to country and western, and has been revised multiple times before each new production. The show became known for its staging and choreography by Arlene Phillips, as the full cast performed on roller skates, in a set by John Napier that travelled around the whole auditorium. Race sequences played out over the audience’s heads and around the whole theatre. Newer productions have used 3D technology to get around this staging problem, and have been equally effective. 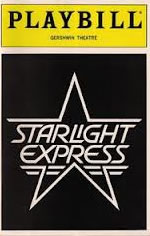 Boy’s train set comes to life as the rusty underdog fights to become the world train racing champion to win the love of a fellow carriage.

The show opens with the voice of ‘Control’ who is playing with his toy train set. He begins to fall asleep as the “Overture” begins, and as the music builds, the “Entry of the National Trains” begins. The trains speed around the stage, and are rudely interrupted by Greaseball and his gang of thugs who sing “Rolling Stock”. Greaseball challenges any train to a race, saying he cannot be beaten.

Rusty the steam train enters and is shunned by other trains. He wants to compete in the race, but the coaches are unsure that he will be safe racing against faster machines. The coaches introduce themselves as Dinah the food car, Buffy the buffet car, Ashley the smoking car and Pearl who had previously agreed to race alongside Rusty. Greaseball and his cronies try to impress the gathered crowd to show how strong they are and to prove the supremacy of Diesel engines, (“Pumping Iron”). Rusty brings on the freight trains who tell everyone that “Freight is Great”.

As the first race is about to start and the trains line up, the lights go dark and Electra arrives onstage singing “AC/DC” and impresses everyone by being an electric train. He has his pick of all the carriages, and Pearl dumps Rusty in order to connect with Electra, (“He’ll Whistle At Me”). In the first heat, Greaseball and Dinah cheat to win, but Dinah is not very happy and as she tries to protest Greaseball knocks her to the floor.

Poppa enters and teaches everyone how to sing the blues, (“Poppa’s Blues”) as Rusty enters and looks downhearted. Poppa tells him to believe in himself and that he can race with Belle the Sleeping car. In the second heat Rusty loses to Electra and Pearl and Poppa tells Rusty to believe in the power of the Starlight Express. Rusty rejects his help, but they hear that heat three needs an extra racer to take the place of the British train who has broken down. Poppa jumps into the race and wins narrowly, proving the power of the Starlight Express. Rusty finally believes and sings to it for guidance and help “Starlight Express”.

Act II begins with “The Rap” as Poppa pulls out of the race and Rusty takes his place in the finals. Greaseball dumps Dinah in favour of Pearl, and Dinah mourns the loss of her partner in “U.N.C.O.U.P.L.E.D”.

Rusty suffers from nerves once again, and speaks to the Starlight Express who convinces him he can win, and to look inside himself to realise he can win. In a heated final race, Electra and Greaseball fight between themselves over who will win. As Greaseball dumps Pearl mid-race, Rusty steps in to save her, and as the two fight between themselves he crosses the finishing line first. Pearl realises that she should have been with Rusty from the beginning and sings “Only He”. The rest of the cast celebrate and sing “Light at the End of the Tunnel”.