She Loves Me is a musical based on the frequently adapted play ‘Parfumerie’ by Hungarian Miklos Laszlo, which was also the basis of the 1998 film ‘You’ve Got Mail’ starring Tom Hanks and Meg Ryan. The show features two shop workers in Budapest who are unknowingly each other’s secret pen pals, despite being constantly at odds with each other in real life. The musical features music by Jerry Bock and lyrics by Sheldon Harnick, the team behind ‘Fiddler on the Roof’. The book is adapted from the play by Joe Masteroff. Originating on Broadway in 1963, the show has had successful productions all around the world, with award winning revivals in the West End and Broadway throughout the 1990s. 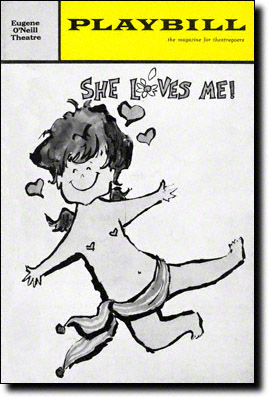 She Loves Me - Original Broadway

She Loves Me - Original London

She Loves Me - Broadway Revival

She Loves Me - London Revival

The show begins on bright morning in Budapest in the late 1930s. The employees of Mr Maraczek’s Parfumerie arrive at work and gossip about the daily arrivals, (“Good Morning, Good Day”). Arpad Laszlo the delivery boy greets Ladisov Sipos, a middle aged Jewish salesman. They are joined by the sexy Ilona Ritter and her part-time boyfriend Steven Kodaly along with the manager Georg. The team go into full sales mode as Maraczek arrives. Georg is smitten with a pen pal he has made and shares his romantic letters with the team as Maraczek advises him to get married, (“Days Gone By”).

A new musical cigarette box arrives in the store that Maraczek believes will sell out. He sets them a challenge to sell one in the first hour. Amalia Balash, a shy young lade enters trying to get a job, but Georg tells her they are not hiring. She promises she has sales skills and convinces Maraczek to hire her after selling a music box to a customer, (“No More Candy”).
Georg and Amalia argue constantly at work, kept going by their mutual anonymous romantic pen pals, not realising that they are writing to each other, (“Three Letters”). Both of them have arranged to meet their pen pals and Sipos observes that they continue to bicker because they in fact like each other very much. Maraczek gets continually frustrated with Georg as he thinks it is he who is having an affair with his wife. On the night of his date Georg makes him stay late to hang Christmas decorations. Amalia says she cannot stay, and Georg is not excused and decides to quit. Amalia sets out to meet her date in a restaurant armed with a copy of ‘Anna Karenina’ with a flower in it. Kodaly starts to seduce “Ilona” and just as she falls for him he realises he can still go to another date that he has planned. Ilona is angry saying she will never fall for him again, (“I Resolve”).

Maraczek orders a private investigator to find out about his wife’s affair, and he reveals that it is Kodaly who is having an affair with his wife and not Georg. His wife calls and tells him she has to stay out late. Upset, he puts a gun to his head but Arpad enters just in time. Meanwhile Amalia is waiting patiently at the restaurant where the waiter is trying to maintain a “Romantic Atmosphere”. Georg arrives and realises his pen pall is Amalia, asking Sipos for help. He is forced in to see her, but doesn’t tell her that it is he she is waiting for. He tells her a “Tango Tragique” about a woman who was murdered on a blind date. As they argue, Amalia is left alone hoping her “Dear Friend” will rescue her.

The next day Maraczek wakes up after surviving his suicide attempt. He is impressed with Arpad’s work and promotes him to the position of a clerk, (“Try Me”). Georg also visits and Maraczek apologises for his anger and reinstates him as manager, telling him to fire Kodaly.

Georg goes to visit Amalia who has called in sick to work but pretends she is simply late, (“Where’s My Shoe?”). Georg takes her back to bed and leaves her Vanilla ice cream as a gift. He makes up a story to comfort her about her failed blind date. Amalia is taken with Gerog’s conversation and thinks about how kind he has been “Vanilla Ice Cream”. On the street Georg rejoices that “She Loves Me”.

Back in the store Ilona tells Sipos that she has been on a date with an optometrist who she met on “A Trip to the Library”. Kodaly is fired and bids everyone farewell, (“Grand Knowing You”). The busy Christmas shoppers keep the store alive and Maraczek returns in good health. As they all leave for a fun Christmas, Amalia arrives and discovers that Georg is her ‘dear friend’. They kiss as the curtain falls.