Neil Simon’s book to Promises, Promises alongside a well covered score by Burt Bacharach and Hal David helped this show become one of the most popular Broadway musicals of the 1960s. Based on the Billy Wilder film ‘The Apartment’, the show is a fast paced farce focusing on sexual politics in the work place in 1960s New York. Michael Bennett’s original production featured iconic choreography to numbers such as ‘Turkey Lurkey’, and many of the show’s songs have since become standards after being covered by popular music artists, such as ‘Knowing When To Leave’ and ‘I’ll Never Fall in Love Again’. 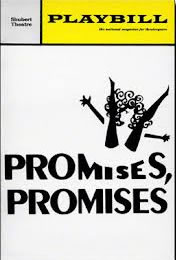 the screenplay The Apartment by Billy Wilder and I.A.L. Diamond

A junior insurance executive at Consolidated Life, Chuck Baxter hopes to advance in his career quickly (“Half as Big as Life”). As such, he allows his superiors at the company to use his apartment with their respective mistresses for their continued promises he will be promoted “Upstairs” soon. Chuck, meanwhile, has fallen for a waitress in the company’s cafeteria named Fran who he hopes will notice him one day (“You’ll Think of Someone”).

The company’s personnel director, J.D. Sheldrake, figures out what Chuck is offering to his bosses because of their unilaterally glowing reviews. He meets Chuck privately to offer him that long-awaited promotion and tickets to a basketball game in exchange for having exclusive use of Chuck’s apartment. Chuck agrees, and asks Fran to go to the game with him. Fran says she would love to, but first has to meet with her soon-to-be-ex.

It turns out that Fran’s lover is Sheldrake, who is married. Fran wants to call it quits, but he manages to convince her to spend one last night with him (“Knowing When to Leave”), and she ends up standing Chuck up, but he immediately forgives her. Chuck’s bosses are furious that they can no longer use his apartment (“Where Can You Take a Girl?”). The company’s annual Christmas party is in full swing (“Turkey Lurkey Time”), where Sheldrake’s secretary Miss Olsen tells Fran that she is just one in a long line of mistresses and Chuck discovers that Fran is the girl Sheldrake has been bringing to his apartment.

On Christmas Eve, Chuck gets drunk at a bar, where he meets another lonely soul, Marge and invites her back to his place. Meanwhile at his apartment, Fran tells Sheldrake she knows all about his other affairs, but he replies that she’s the only girl he loves. She briefly takes him at his word before he says he has to leave to spend Christmas with his wife and family. Alone, Fran finds a bottle of Chuck’s sleeping pills and swallows them all.

Chuck arrives with Marge to find Fran passed out on his bed. He quickly sends Marge away and gets his neighbour, Dr. Dreyfuss to come rescue Fran from her overdose. Chuck calls Sheldrake to explain the situation, but Sheldrak says he can’t leave his family and asks Chuck to look after her on “Christmas Day.”

Chuck tries to keep Fran’s thoughts away from suicide, and the bond between them begins to grow as they discuss their private lives (“I’ll Never Fall in Love Again”). One of the men who used to use Chuck’s apartment finds out that Fran has been staying there, and for revenge he contacts Fran’s protective brother, Karl. When Karl arrives, he believes Chuck is the reason for Fran’s heartbreak and promptly punches him in the face before taking her with him.

Miss Olsen discovers that Fran nearly killed herself over Sheldrake and decides to quit her job before telling Mrs. Sheldrake all about the affairs. With no other options, Sheldrake decides to win back Fran, and asks Chuck for the keys to his apartment on New Year’s Eve. Chuck refuses and quits his job too after growing sick of all his superiors broken promises (“Promises, Promises”). When Sheldrake tells Fran that Chuck has quit, she realises that he is the only on who really loves her. She runs to his apartment, where he confesses his love before they being a game of cards.