Stephen Sondheim’s musical Follies is one of his most popular shows. Written in conjunction with James Goldman, the original production directed by Harold Prince achieved legendary status due to its size and scale. The show features an unforgettable score that has been re-written for various productions, and many of the songs have become solid show standards. 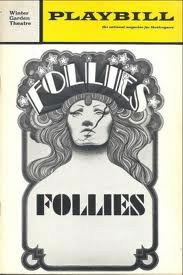 A reunion is held on the dusty stage of the Weismann Theatre that is about to be demolished. It was once the home of the Weismann’s Follies, home to the most beautiful Follies girls in New York. Sally Durant Plummer is the first to arrive at the reunion, now aged 49. Phyllis Stone joins her along with her successful husband Ben. Their relationship is clearly tense, and as more chorus girls arrive the party gets under way. Sally’s husband Buddy is a lively salesman who is also disappointed with his marriage.

Mr Weismann enters and welcomes everyone to the stage. The old Master of Ceremonies Roscoe introduces each of the “Beautiful Girls” one by one which includes: Stella Deems now a store owner, Solange la Fitte a vibrant coquette, Hattie Walker, dancers Vincent and Vanessa, Heidi Schiller and Carlotta Campion, a film star. The guests begin to share stories about their time together, especially the couples Ben and Phyllis and Sally and Buddy. Sally and Ben are former lovers and are nervous about seeing each other. Ben and Buddy reminisce about waiting around for the girls upstairs and they are joined by the ghosts of their younger selves. The older crowd perform a medley of songs that climaxes with Hattie’s performance of ‘Broadway Baby’.

Ben wonders if he made all the right choices choosing Phyllis and contemplates over ‘The Road You Didn’t Take’. Sally tries to convince him that she is happy with Buddy, but it seems clear that she still loves Ben, despite being hurt when he chose to marry Phyllis. Phyllis interrupts their moment and verbally attacks Sally, just as the girls line up to perform an old number ‘Who’s That Woman?’ and their younger selves mirror them in a full out tap routine. Carlotta later jokes about how her number was cut once upon a time, but these days it works and she belts out ‘I’m Still Here’.

Ben tells Sally that he loves her and they kiss as Buddy enters. We see a flashback of their younger selves in a similar situation. Ben tells Phyllis that he wants a divorce and she is angry, and begins to consider his request to leave her. The couples begin to argue furiously together and they reach a state of confusion as they become taken over by their follies, and everything turns into a large ‘Loveland’ and their life becomes a production number. The character’s real emotions are displayed through a string of follies style numbers played out onstage. As Loveland dissolves back into reality and we are brought back to the crumbling theatre, the night is over. Sally is escorted home by Buddy, and Phyllis helps Ben find his dignity, as both couples promise to work it out. As they leave we see their younger selves, once so happy.

Also the winner of the Drama Critics’ Circle Award, and the Drama Desk Award for Best Composer.